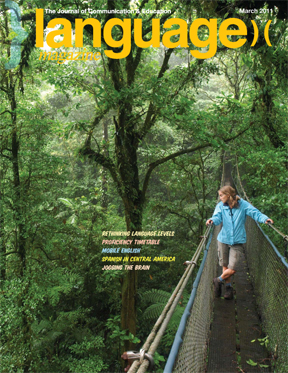 As dictators topple across North Africa into the Middle East, and new uprisings coalesce on almost a daily basis, one of the most striking aspects of this new revolutionary wave is the ability of its participants to communicate not only with their compatriots or comrades but across borders with news organizations and like-minded activists via social networks, blogs, and other forums.

The defining image of the international Arab democracy movement is that of a rebel wielding not an AK47 but a Blackberry. From Tunisians blogging to Egyptians tweeting and Libyans texting, multilingual techno-literacy is the mass’s weapon of deconstruction.

Impassioned pleas for support in English, French and Arabic accompanied by amateur video were heard around a world that had no idea of the fomenting discontent until it was communicated internationally via web-enabled devices predominantly in English – the language of international communication.

The English-language Saudi daily Arabnews captured the feeling when it published the catchy headline: “It’s cool to be Arab again” during the Egyptian revolt.

Another icon was the handwritten sign in English held aloft in the streets of Cairo which read: “Today, my real birthday, I am free.”

Some commentators have called the uprisings “Twitter or Facebook revolutions,” giving credit to the media that enabled them. While others have stubbornly denied that such grassroots media have played any part whatsoever.

The reality is that educated, literate, multilingual activists were sufficiently empowered by these new communication tools to break free from their shackles. Years of interconnectivity had exposed the shortfalls of these oppressive regimes to their citizens and constant, cross-cultural communication acclimatized youth to inevitable change.

The instantaneous nature of internet self-publication explains the viral spread of these revolutions and their lack of hierarchy. But only the articulate, web-savvy players were truly able to participate.

“They (the West) are seeing something new,” said Sari Hanafi, a sociology professor at the American University of Beirut. “They are looking at civilized, peaceful people, not the stereotypical image of the bearded Arab.”

Al-Jazeera, the Qatar-based news service vilified by many during the first stages of the Iraq War, is now in discussions with Comcast, America’s largest cable operator, about bringing the network’s English-language channel to millions of U.S. homes. But we need to know more about the partners in revolution. In the last 60 years, the population of Egypt has quadrupled from less than 20 million to 84 million people of which the vast majority are under 30 years old. Youth equals change as long as youth is educated and has access to information.

Protesters were only able to secure international media coverage so quickly thanks to their multilingualism and the ability to broadcast their own news using smartphones. With the world already watching, repressive regimes were less likely to forcibly quell rebellion so these democracy movements had the chance to grow. Then, they were able to garner the domestic and international support they needed to succeed. Communication breeds democracy so it is in all of our interests to do all we can to encourage global literacy and multilingualism.

How Long is Too Long?
Diego Uribe presents a study of attaining academic English proficiency

English to Go
M. Catherine OliverSmith describes how expert execution of a simple idea has resulted in an international educational phenomenon