The Word is Your Oyster 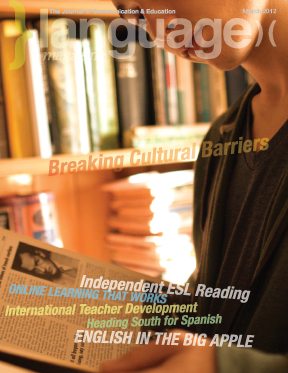 According to some vocal activists and former treasury secretary, Lawrence H. Summers, English’s emergence as a global lingua franca has rendered it unnecessary for English speakers to cater to speakers of other languages let alone waste valuable time learning their languages.

Of course, English is of enormous value and its use as common means of communication should not be underestimated. Everyone should be given the opportunity to learn English not only for practical, economic reasons but also so that they can share its abundant vocabulary, its literary treasures, and even its comedic value. It is for the same reasons that it would be a great pity for English speakers to miss out on the joys that are part and parcel of learning another language.

Yes, you can probably get by well enough just speaking English with a handheld translator at the ready in case you encounter a “foreigner” — and that’s exactly what anyone who doesn’t speak English will remain to you — a “foreigner.” So will their culture and all the possibilities that knowledge of it might lead to. Monolingualism should not be part of any young person’s vocabulary: it is an acceptance of limitations.

There are plenty of practical reasons for being multilingual — business, security, travel, friendships, information, mental agility to name a few — but languages are also a pleasure, an indulgence — they lend new insight to a familiar world and they unlock the doors to less familiar worlds. Language can be a powerful tool for shaping abstract thought. When sensory information is scarce or inconclusive, languages may play the most important role in shaping how people think.

And thinking, not performing tasks, is what a well-rounded education is supposed to encourage.

Marcelo M. Suárez-Orozco, a professor of globalization and education at New York University and author of Educating the Whole Child for the Whole World, responded to Summers’ assertion with compassion: “The idea of education as the foundation for an engaged, mindful, citizenry to intelligently deliberate and decide the pressing issues of the day is being ignored in today’s education debate. America’s preoccupation with whether our students are keeping up with their peers in Hong Kong, Shanghai and South Korea overlooks other fundamental purposes of education, confounding ‘doing well’ economically with being fully and productively engaged with the world.”

Diversity is a catalyst for development. We need people of different characters and personalities to stimulate discussion and progress. We need scientists, computer programmers, artists, and poets. By the same token, linguistic and cultural diversity enhance our lives. People communicate using a multitude of languages that vary considerably in the information they convey and may even impart different cognitive abilities.

Learning a new language requires effort and investment, as does the provision of services to enable inclusion of those who are not fluent in the dominant language, but the returns cannot be quantified in mere economics. Multilingualism presents new insights into the world, offers different opportunities, and, quite simply, makes life more interesting. As the eminent linguist and founder director of the Central Institute of Indian Languages D.P. Pattanayak put it, “one language is not only uneconomic, it is absurd.”

Reading for Number One
Bruce B. Brown examines how independent reading can transform the route to English language acquisition