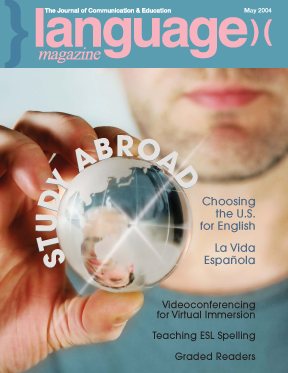 A few weeks ago, the influential Milken Institute held its Global Conference in Los Angeles. This is one of these events where business leaders, academics and politicians convene to discuss how they believe policy should be shaped. Despite the notoriety of its founder, junk-bond dealer Michael Milken, the Institute and the Milken Family Foundation, which funds medical research and education, are very well respected and can count some very influential figures amongst their supporters.

One of the main themes of the conference was education, so it was not surprising to see that Richard Riordan, California’s Secretary of Education and Roy Romer, Superintendent of Los Angeles Unified School District, were attending the event. However, neither had the time to attend one of the most interesting discussions on The Impact of English Language Learners on K-12 Priorities, despite over 70 percent of LAUSD’s students being of Hispanic origin and nearly 40 percent of Californians speaking a language other than English at home.

First member of the panel to speak was Ron Unz, entrepreneur and chairman of English for the Children, which successfully campaigned for Proposition 227 to limit bilingual education in California. Unz went over old ground, summarizing how he had successfully campaigned for English-only legislation and then selectively manipulated test results to support his position against bilingual education until he was obliged to relinquish the podium by moderator Robert Lally, president of Leapfrog Schoolhouse. This was followed by presentations by superintendents of two of the largest school districts in the Western U.S. and by LAUSD’s director of Language Acquisition, all of whom are bilingual, and none of whom felt it necessary to challenge Unz’s presentation of opinion as fact. They were all concerned with the over-riding priority of how best to make sure that all of the children at their schools become literate, and they recognized that the reality of education in a diverse community is that all forms of communication are required.

After the discussion, there was a luncheon attended by nearly all of the conference delegates curious to listen to a panel consisting of four Nobel Laureates in economics. Among the 2,000 attendees from more than 40 nations were hundreds of corporate CEOs, representatives from many significant foundations, investment analysts, fund managers, dozens of journalists, many senior government officials, as well as ten Nobel Prize winners. Throughout the hall conversations could be heard in every type of English accent conceivable, Latin American Spanish and Castillian Spanish, Japanese, Chinese and lots of other languages. With such diversity, you could hardly expect much common ground, however, well over 80 percent of the delegates spoke more than one language fluently, and over 70 percent had participated in some form of international education.

Maybe success does have a common denominator.

Making the Reading Grade
David R. Hill surveys a host of graded readers from the UK in his quest for extensive reading materials

Learning English with Uncle Sam
Despite depressed enrollment figures for Intensive English Programs in the U.S., Kevin Easterbrooke believes that students will soon start flocking back

Dialects: Arizona’s Not So Standard English
Lauren Hall-Lew counters the notion that Arizonans do not have their own dialect