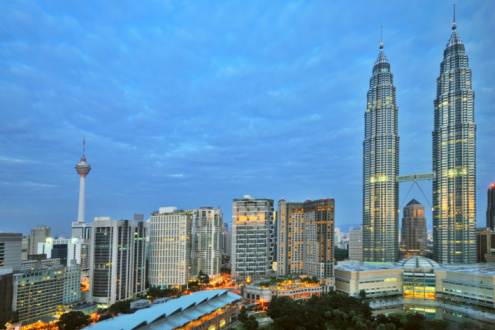 The classroom filled almost imperceptibly, and by the scheduled 7:30 p.m, start, 30 students were ready to begin their twelve-week course in the Thai language in a meeting room at the YMCA in Penang, Malaysia.

Combining both humble grace and engaging discourse, Professor Prim quickly brought the class to their task at hand, reading out a number of Thai words and phrases while introducing Thai culture to the classroom full of both men and women ranging in age from 18 to 65.

Some were there for business reasons. The border to Thailand is two hours north of Penang. Thailand is also a hugely popular tourist destination, and some students were there to learn Thai so they could make the most of trips by being able to deal directly with local merchants.

Others were there to learn for religious reasons. As a Buddhist country, Thailand offers devotees the opportunity to congregate in numbers and learn from the lectures of revered abbots. One of the students mentioned that this was his reason for taking Prim’s class, so that he could complement his Buddhist studies with lectures conducted in Thai.

At 10 p.m., the class emptied out of the air-conditioned class into the tropical night of Penang, a city that never sleeps, comprising thousands of thriving small businesses, shops, and cafés under an umbrella of 30-floor-plus residential towers.

Penang is one of many cities in Malaysia where places like the YMCA and Confucius Institute are teaching languages. With a steadily growing population of 29 million, Malaysians see the value of creating a language hub. Prime Minister Datuk Seri Najib Tun Razak recently made the point in the country’s main English-language newspaper, The Star: “It will be good if all of us in the country can speak and write in Bahasa Malaysia, English, and Chinese all at once. This multilingual ability will give us a global competitive edge. These three languages are part of our national identity. If all Malaysians have this strong national identity, we will be able to compete with anyone on a global scale.”

Malaysia is already competing on a global scale — large-scale factories and laboratories for Western companies like Intel and Mattel have afforded a sustainable income for many of its residents for years now. As it was a British colony until independence in 1957, it possesses a large percentage of English-speaking citizens in its population. These English-speakers contribute a key factor to Malaysia’s economic growth. When you add that a significant number of these citizens also speak Chinese in a variety of forms (Cantonese, Mandarin, Hokkien, Hakka, Hainan, Foochow), one can understand why the country values its international connections.

Malaysian history is one of immigration. The original inhabitants of the peninsula, the Malay, refer to themselves as “the Children of the Earth” and speak Bahasa Melayu, dialects of which extend across the vastly distributed Indonesian islands of the equatorial South China Sea for a total of 40 million speakers.

In the years beginning in the tenth century, Portuguese and Arabic sailors supplied the Malays with worldly goods and the word of Islam, which led to its establishment as a Muslim country in the fifteenth century. What brought these traders were the spices — cinnamon, ginger, pepper, cardamom, anise — and the rich variety of tropical fruits that graced the thick vegetation of the peninsula’s jungle.

More recent immigrants are the Chinese and Indians that arrived along with the British during the colonial period. They found ready work in many of the back-breaking tasks that come along with empire building. As Britain laid the architectural groundwork for most of modern Malaysia, the Malays found employment in the business of government functions by adopting English as a second language, while the Chinese and Indians in large part saw to providing the multitude of services a country needs in the form of small shops and food sellers. This established an expanse of small businesses across the country in a manner that still functions the same way to this day.

These are the groups, the Malays, Chinese, and Indians, that Prime Minister Najib is trying to bring together under the 1Malaysia program launched under his leadership — groups which recognize their mutual influence in the country but had not yet integrated until only very recently. Today’s students in Malaysia offer considerable promise on the world stage because of their linguistic skills.

But Chinese schools have not been given equal consideration to date. Bahasa Malaysia is mandatory, English is essential for higher education and fully provided, but Chinese language learning is generally funded by family and social contributions.

Keith Yeoh, a student who was taking Prim’s Thai class at the behest of his company, expressed how the ethnic Chinese are frustrated with their country.

“Chinese education in Malaysia is not very balanced, like bumay (100% Malay). Non-bumay are sidelined. The talent of third generation Chinese is all migrating to Singapore and Australia because they are not recognized.”

Yeoh refers to government policies instituted by the New Economic Policy Act of 1970 that forced businesses to hire quotas of Malays, gave preferential government posts to Malays over other nationals, and allowed the nationalization of successful businesses owned by non-Malays as some of the reasons for feeling sidelined.

Learning Chinese takes tremendous discipline, something the Chinese families have drilled into their children generation after generation. This cultural custom groomed an intelligent, inventive, and successful subgroup in Malaysia. It is this same discipline that has kept the Chinese tongue thriving in the country to this day.

Because much of the country’s success is due to its often highly educated Chinese-speaking citizens, such policies make it difficult for a person like Yeoh.

“In Malaysia, there is a Chinese-education pressure group called Dong Jong. This is the pressure group to protect Chinese education in Malaysia. The [country’s] education minister still has the power to shut the Chinese media, as well as primary and secondary education. It [Dong Jong] is the last line of defense for the Chinese society in Malaysia,” said Yeoh. “The only way to change the situation is through politics and to do away with these unbalanced policies. This is affecting the social economy of Malaysia by turning away business opportunities and investments.”

Gordon Berrick is a corporate consultant for a private firm that helps businesses work with companies in Southeast Asia.