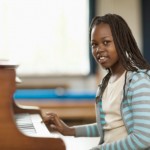 New research presented at the American Psychological Association’s annual meeting links music education to increased learning and literacy skills. The findings, which involved hundreds of kids participating in musical training programs in Chicago and Los Angeles public schools, highlight the role learning music can have on the brains of youth in impoverished areas, according to presenter Nina Kraus, PhD, a neurobiologist at Northwestern University.

“Research has shown that there are differences in the brains of children raised in impoverished environments that affect their ability to learn,” said Kraus. “While more affluent students do better in school than children from lower income backgrounds, we are finding that musical training can alter the nervous system to create a better learner and help offset this academic gap.” Up until now, research on the impact of musical training has been primarily conducted on middle- to upper-income music students participating in private music lessons, she said.

According to Kraus’s research, musical training appears to enhance the way that children’s nervous systems process sounds in a busy environment, such as a classroom. This improved neural function appears to affect memory and attention spans, allowing students to focus better in the classroom and improve their communication skills.

“There’s a connection between sound and learning in that when you’re learning to read you need to connect the sounds of words that you’ve heard for many years with the symbol on the page, so you’re making a sound-meaning connection,” explained Kraus in an interview.

Many of Kraus’s study participants are part of the Harmony Project in Los Angeles, which was founded by fellow presenter Dr. Margaret Martin. In her most recent research, Kraus studied children beginning when they were in first and second grade. Half participated in musical training and the other half were randomly selected from the program’s lengthy waiting list and received no musical training during the first year of the study. Children who had no musical training had diminished reading scores while Harmony Project participants’ reading scores remained unchanged over the same time span. Kraus’s lab also found that, after two years, neural responses to sound in adolescent music students were faster and more precise than in students in another type of enrichment class.

“Early sustained music learning is actually the frame upon which education itself can be built for low-income kids,” Martin said in an interview.

Last year, 93% of senior participants in the Harmony Project graduated from high school and went on to college, compared to an average graduation rate of 50% in the neighborhoods the Project serves.