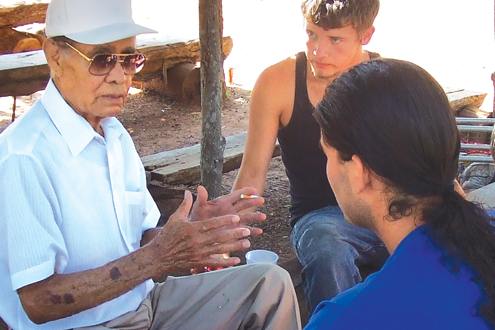 The Euchee, also spelled Yuchi, tribe survived Spanish, French, and English colonialism, Manifest Destiny, disease epidemics, and natural disasters with such stealth that historians previously thought the tribe had become extinct in the 1800s.
The Euchee are still here, and they are taking steps to ensure that their language survives near extinction.

The origins of the Euchee tribe and language have long remained a mystery. During the 16th century, Spanish explorer, Hernando de Soto, documented presence of the Euchee in the central region of Tennessee, while other records indicate that the tribe was known to have widely scattered villages ranging from Florida to Illinois, the Carolina coast to the Mississippi River.

During the 1830s, the U.S. government removed the Euchee from their ancestral lands to the Indian Territory, present-day Oklahoma. They left more than their homes and lifestyle upon the mass upheaval — they left an imprint upon the land.

From the Atlantic coast, place-names like Tybee Island (dabi-salt) marked the trading business of the Euchees who used currency in the form of salt. Yazoo, Mississippi originated from yazu (leaf) and Tennessee is speculated to originate from Tenase, a former Cherokee village once inhabited by tribes of the Euchee. Names like Chickamauga, Chilhowee, and Chattanooga are familiar upon the pages of a history book with only a brief footnote to the sacrifice of the Euchee tribe.

Richard A. Grounds, former research professor at the University of Tulsa, and his daughter, Renee Grounds, have led efforts to preserve the Euchean way of life, beginning with their language. Bound for extinction with only five first-language elders remaining, the language is highly endangered.

“This is the most critical issue in Indian country today — the demise of our original languages,” Dr. Grounds notes. “Because it gets at who we are, our self-understanding, our way of relating to the world, the Creator, the way we pray, and the way we situate ourselves in the world.”

Richard and Renee share a common vision for preserving the Euchean language with the help of the five remaining elders, all above the age of eighty: “Our joy and challenge,” notes Dr. Grounds, “is to bring back [the Euchee tongue], revitalize the language, keep it alive in our community, and bring it forward so our children and grandchildren can also say, sôKAnAnô — “We are still here.”
Enter the Euchee Language Project: the project is a community effort with a mission “to keep alive the rich heritage of the Euchee people by creating new young speakers of the unique language through breath-to-breath immersion methods with fluent elders and children.” Founded in 1994, the language school focuses on complete language immersion, picture-image association, and small-group instruction led by five first-language elders alongside Grounds and his daughter.

Renee serves as a lead language instructor. She explains that “the Euchee language holds significance in that the language is a linguistic isolate” — a language without other linguistic origins. “The language is also beautiful that men and women speak it differently,” she notes. The gender-based language uses a distinct female and male tongue for conversing, a vital aspect of the teaching as four of the five elders are females. “The language reflects the unique roles played by men and women.” She believes that the differences emerged from the historic division of labor between men and women in traditional Euchee communities which resulted in men spending more time together than women.

One man remains to preserve the male speech: his name is K’asA.

At 86 years old, K’asA Henry Washburn remains the last man standing to preserve the male tongue of the Euchee language. As the sole male speaker and last male of the Euchee tribe, he holds the immense responsibility of preserving the male speech format of the language:

To understand the heart, the tongue, and the stories of the Euchee people, the language must first be learned. A reflection of the dogged spirit and innumerable barriers these people have encountered throughout history, the language serves as a storyboard for the forces to separate and quiet the Euchee people and the tenacity of its people to live on.

The Euchee language can be challenging as no specific alphabet or syllabary is practiced. With 49 phonetic sounds, 38 consonant sounds, and 11 vowel sounds, the language is considered a morpheme agglomerative, an assembling of words composed by stringing together pre-existing morphemes to construct new words. No single vowel, consonant, or particle stands for a particular sound or meaning; rather the combination of words and from whom they are spoken characterizes the meaning. The language also uses phonemes known as “particles” in order to express a variety of things including the following: possessives, cases, ideas, ablatives, and demonstratives. The @ symbol and capital letters are pronounced as each letter denotes and are examples of such “particles” — able to serve a variety of meanings depending on the assembling of words. Word order is subject-object-verb and denotes a phrase by that order. For example, the word “dinosaur” is made up of morphemes for the words, “lizard,” “face,” “orifice,” “red,” and “big” in subject-object-word form — sothl’an ahsh’ee chahthlah’a. The apostrophe in the term serves as a “pause” or glottal stop that denotes a change of meaning for a new word to be formed. The immediacy of learning and teaching the Euchee language is clear as meanings of given words change with regards to the gender of their speaker and their position in the sentence. The task is one held with significance for the remaining Euchee elders as they continue to teach the art.

From forced separation of Euchean communities, a generation of English as the primary language, and a mere five remaining elders to preserve the language and way of life, the physical barriers reflect not only the hardship but the fight for the Euchean way of life. Despite the forces determined to extinguish their language and people, the teaching persists. The language continues.

“If the language dies, I don’t know what I’ll do. As long as I’m living… as long as I’m here living, I’ll teach the young people and they’ll carry it on,” nods K’asA.

Carry it on he has — eight new speakers have since emerged fluent in the ancient Hokan-Siouan tongue.

For more information, visit www.euchee.org, and to hear the language, visit www.languagemagazine.com/adoptalanguage/Euchee.

J’Nisha Towne is a writer and educator residing in Nashville, Tennessee and a regular contributor to Language Magazine.