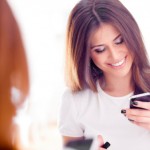 For polyglots, it can be an arduous task to manually change the language on a smart phone keyboard depending on the task— between texting friends and family in different language, emailing clients around the world, and reading international news, polyglots may switch languages hundreds of times a day. Unlike the polyglot brain that can seamlessly code switch, our smart phones have trouble detecting the language and when one neglects to change the keyboard with the language, wacky auto-correct nonsense ensues.

Google announced today that its Android technology is ready to meet the needs of bilinguals and polyglots. The new version of the Google Search app allows users to choose up to five languages and the app can then detect which language is used at any time. Polyglots will no longer have to change the device’s settings every time they need to change languages.

“So you can fire off a search for nearby restaurants in English, then dictate a text to your friend in French,” David Eustis, a Google Android software engineer wrote on Google’s blog. “More than half the world’s population speaks two or more languages—and now Google can keep up.”