Languages for the Long Term 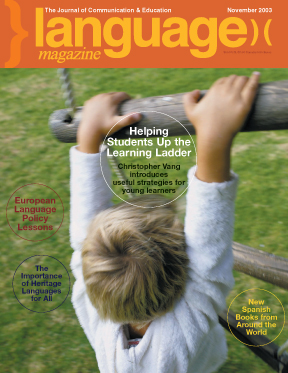 Everybody seems to agree that the ability to speak more than one language will soon be a prerequisite to success in our increasingly global society.

Many argue that the tolerance and under­standing garnered through the acquisition of other langu­ages will prove to be essential for the survival of our society itself. The fact is that second languages should no longer be considered a luxury in this era of global interdependence; however, here in the U.S. we are on the verge of eliminating foreign language instruction from the core curriculum in public schools (see News, p.10) at a time when our troops are deployed in more locations around the world than ever before — it defies logic.

We are not even capitalizing on the language assets we already have, according to the latest census figures, more than 20 percent of Americans speak a language other than English at home (see News, p.11), yet heritage languages are being bred out of our children at school (see Language R Us, p. 14) and our future assets are being depleted. That is not to say that children should not be learning the English, Math and other basic subjects that they will need to progress in their lives, they should be learning these subjects as well as languages. Critics may argue that our schools need to succeed at teaching the basics before aspiring to produce multilingualchildren, but languages are important enough in their own right, and research indicates that learning a second language will even assist them in other subjects.

In Europe, there is a stated goal that every European should speak their “mother tongue plus two other languages” (see Language Collaborators, p. 24), which may seem to be an impossible objective, but it is considered a priority for the integration of a continent where two World Wars have started, and it is recognized as an essential tool in modern society. As it is deemed to be so important, funding is being made available by European institutions and national governments to hasten its achievement. Europe has its own problems with basic education, especially as it struggles to integrate the former countries of the Eastern bloc, but spending on education is considered a worthwhile investment. On average, the Europeans invest three times the amount of money that is spent in the U.S. on the education of a child, and additional funding is being allocated to language learning.

If we are to maintain our global influence and work with the people of this world to make it a safer place, we need to recognize that languages are fundamental to global integration and tolerance, and the investment required to learn them will be more than offset by the benefits.

P.S.: We hope that you like the redesign of Language Magazine. Increased newsstand sales and our reach to a wider audience inspired us to come up with a more modern style. Please let us know what you think about and what you think could be done to improve it. Comments to [email protected]