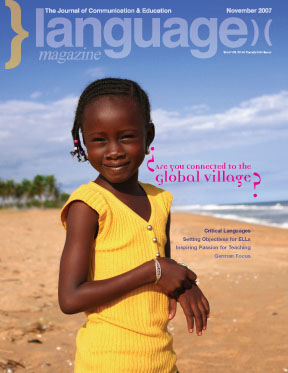 While business leaders are saying that our “education system must be strengthened to increase the foreign language skills and cultural awareness of our students in order to confront the twenty-first century challenges to our economy and national security” (see World Languages, p.19), ten percent of our high schools are being labeled as “dropout factories,” where no more than 60 percent of the students who start as freshmen make it to their senior year, and thousands of schools are being branded as “chronic failures” according to the criteria of the No Child Left Behind Act.

At the same time, a chilling study released by the Southern Education Foundation (www.southerneducation.org) has found that for the first time in more than 40 years, the majority of children in public schools in the South are poor. According to the report, most public school students are considered low income in a total of 14 states, including 11 in the South, where a staggering 84 percent of students are considered low-income in Louisiana, 75 percent in Mississippi, and 62 percent in Florida.

At 17 percent the child poverty rate in the U.S. — which includes any family with one adult and two children earning less than $14,269 — is among the highest in the world. In those states that rank lowest, 26 percent of children live in poverty. Although poverty is a leading predictor of a child’s risk of academic failure, research shows that access to high-quality preschool programs can help these children develop the cognitive and social skills needed to succeed in school.

In most discussions of the achievement gap, the emphasis is on ethnicity and little mention is made of income disparities, but the stark reality is that there is a clear correlation between poverty and low achievement, and public education offers the only escape from the poverty trap.

Despite this disaster, there is a lack of political will to try to correct the situation —negotiations over the revision and/or reauthorization of NCLB have stalled, and prospective Presidential candidates are virtually ignoring education.

We need to change our priorities to radically improve the educational prospects of our children; we have to close the achieve-ment gap while improving our education system to better suit the demands of the new millennium if we are to remain economically competitive over the next century. It will not be enough to close the achievement gap so that the majority of students graduate at current levels of attainment.

And business leaders need to realize that increased investment of their record profits in our public school system is the only way this can be achieved. At the same time, we need to encourage innovative programs with proven benefits such as the dual-language initiatives promoted by the PRIDE Act (see p.11).

It is up to us, the electorate, corporate and community leaders, to make sure that no child is left behind because of their parents’ economic status.

President John Adams knew the impor-tance of investing in public education 200 years ago, “The whole people must take upon themselves the education of the whole people and be willing to bear the expenses of it.”