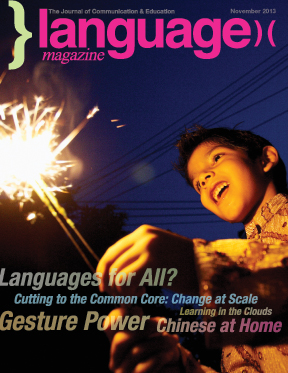 A few weeks ago, many of the U.S.’s most influential figures in language education gathered to discuss how to stop the demise of world-language education and turn the tide so that this country could escape its monolingual rut and start to embrace languages like non-anglophone nations (see page 26). The conference was based on the premise that we have the required body of evidence to prove the value of language education so now we need to move forward with making language programs accessible to every student in the nation. But how can we add an additional requirement to our already overburdened education systems?

Despite the overwhelming consensus among delegates that it was time to seize the moment and take action, enthusiasm was tempered by the encroaching inevitability of the government shutting down the very next day. And that shutdown nailed home the realization that our Congress will be incapable of agreement on education policy for some considerable time. However, that still leaves plenty of options — after all, constitutionally, education does not come under congressional domain.

Interestingly, health care — the very subject over which the government was shut down — offers us an example of how substantial policy change can and does take place. Back in 2011, the Vermont state government enacted a law functionally establishing the first state-level single-payer health care system. Green Mountain Care, established by the passage of H.202, created a system in the state where Vermonters receive universal health care coverage, going far beyond the current provisions of “Obamacare.” A similar bill passed twice in California (2006 and 2008,) only to be vetoed by then-Governor Schwarzenegger. And legislation to implement single-payer health care has been introduced in Illinois, Massachusetts, Minnesota, Oregon, and Pennsylvania.

Now, many states already have some form of world-language requirement for graduation or university entrance, but not only are they often vaguely worded and sketchily implemented, they are seen by many students, parents, and even educators as a hurdle that needs to be overcome rather than an exciting challenge which opens the door to so many more cultural opportunities. So, in some states, we need to make language education a graduation requirement, while in others, we need to campaign for clear state language policies. At the same time, we need to reexamine the way in which we approach language education. Students must be shown the relevance of languages to other academic subjects and to the enjoyment of their lives through travel, music, and art. By finding languages more integral to the curriculum and their lives, students will see them as the asset they are to better communication and understanding.

We can start by incorporating world-language elements into language arts, history, geography, and social studies lessons. We could even run introductory programs to help children appreciate language and understand its importance in our development. And then, we can take advantage of technology and the incredible opportunities it offers students to communicate worldwide and learn according to their own tastes, habits, and styles.

Infants, Words, and Income
Bjorn Carey reports on research showing that two-year-old children of lower-income families may already be six months behind in language development

Cutting to the Common Core: Be the Change
Armando Zúñiga explains how we need to transform the ‘instructional core’ to meet the demands of English language learners in the 21st century

Anglophone Call to Action
Daniel Ward joins supporters of the Languages for All? initiative in their mission to change the dynamic of world language education

Chinese at Home
As demand for Chinese soars, so do the opportunities to learn it in its homeland