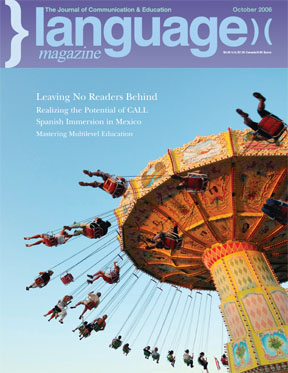 Two new reports have highlighted the growth of the “digital divide” between Spanish-speaking minority students and English-speaking white students in the U.S. As Diana Laurillard makes clear in her article in this issue (pages 30-33), use of the internet is becoming essential for all students, especially those learning languages, so we are once again facing a situation where the students who are in the most need of resources are the most likely to find them unavailable.

Computer and Internet Use by Students in 2003, released last month by the National Center for Education Statistics (NCES), a division of the U.S. Department of Education, revealed that 80 percent of children in Spanish-speaking households use computers, but only 28 percent use the internet, whereas 91 percent of children in households where other languages are spoken use computers and 61 percent use the internet.

Another new report, from the University of California, Santa Cruz, “Crossing the Divide: Immigrant Youth and Digital Disparity in California,” shows that only 36 percent of Latino immigrant youth have a computer at home, compared with 77 percent of U.S.-born non-Latino youth.

“If we want immigrants to become full participants in the labor force and in society, it’s imperative that we bridge this gap,” said study author Rebecca London, an associate research professor with UCSC’s Center for Justice, Tolerance and Community (CJTC).

Schools have taken steps to close these gaps. Virtually all U.S. schools are connected to the internet. The gaps in internet usage between whites and minorities, though sizable, are smaller during the school day.

We can see from these statistics that the main cause of the divide is access to the internet from home. If we are going to solve this problem, we need a national program to encourage the proliferation of low cost internet access across all sectors of our population. This may seem too much to ask, but the govern­ments of most developed nations have recog­nized that this is an investment worth making.

The U.S. is lagging behind other countries in terms of broadband use. According to the Organization for Economic Co-operation and Development (OECD), we ranked tenth in broadband access per 100 inhabitants (as of June 2003). Among the most populous nations, the U.S. followed slightly behind Japan (9th), noticeably behind Canada (2nd), and significantly behind South Korea (1st). A comprehensive Gartner study as to why access to broadband in Canada is twice that of the U.S. (as of August 2003) found that “the only variable between the two nations is that Canada has a public policy for broadband access that is part of its national agenda.”

Closing the achievement gap will not be possible without bridging the digital divide, and the gap is likely to widen unless the internet becomes more accessible to minorities. We should encourage all children to use the internet where available — schools, libraries, etc, educate parents about the importance of being online at home, and lobby government and the telecoms industry to provide low cost internet access to the communities most in need.