Ten Years is a Long Time
in Education 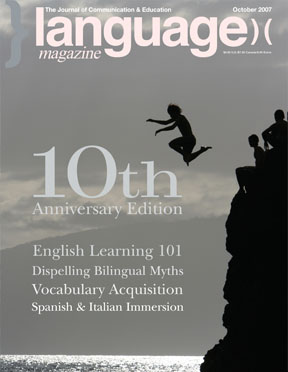 Back in 1997 when, the first issue of American Language Review — the forerunner of Language Magazine — was published, Bill Clinton was in the White House, we knew nothing of the No Child Left Behind (NCLB) Act, bilingual education had yet to be limited in California by Proposition 227, and September 11th was just another day.

An awful lot of things have happened over the last ten years, but educational priorities have largely remained the same. Of course, the terrorist attacks of 2001 prompted the nation to ask why our intelligence services lacked the expertise in both foreign languages and cultures to expose such an attack, which has led to increased emphasis on the learning of “critical” languages. But, there has been no great increase in the number of children studying foreign languages, achievement gaps between English language learners and English-speaking students have not closed, and overall levels of literacy have hardly changed.

The newly released National Assessment of Education Progress (NAEP) scores “show educational improvement across the nation slowed significantly since NCLB went into effect…Gains from 2000 to 2003, before NCLB went into effect, were significantly greater than they were from 2003 to 2007, when NCLB was the law,” according to the National Center for Fair & Open Testing co-executive director Monty Neill. “This happened despite the fact that curriculum narrowed in many schools to little more than test preparation in reading and math,” continues Neill.

However, we are now at a point in time when real change seems possible. A woman and a black man are viable presidential candidates, while our current President’s power has been curbed by congressional elections and a flurry of resignations within his circle of command. And NCLB is up for reauthorization. Despite its good intentions, NCLB did not provide the resources or the flexibility to turn vulnerable schools around. By emphasizing standardized testing, it has created an incentive to teach to the test, and has not even delivered the improvement in scores that could be expected from such a change in emphasis.

The timing of NCLB’s reauthorization gives educational experts a real chance to influence the legislative process, as no leader is looking to pin the new legislation to their lapel.

Congress should listen to the more than 140 national education, civil rights, and religious organizations that have come together to call for a complete overhaul of this federal law. Let’s hope that our elected representatives, whatever their party affiliation, seize this opportunity to make the first great strides of the 21st century to improve our educational system for all students so that in another ten years time we can look back with pride and say that our society truly does not leave children behind.