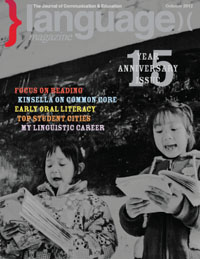 It is now 15 years since Language Magazine’s predecessor, American Language Review, was founded so it’s time to review how American language education has developed since then.

In 1997, the guns were out for bilingual education especially in California where Prop. 227 succeeded the following year in severely limiting the state’s bilingual options despite a complete lack of evidence supporting its backers’ claim that education in two languages left students ill-equipped to succeed. Since then, in some parts of the country, the term bilingual has been replaced by the more socially-acceptable dual-language, and now, middle-class parents all over the country are clamoring to get their kids into schools where they have the opportunity to learn in two languages. It’s not surprising when you consider that 66% of the world’s children are raised to speak two languages or more, whereas only 6.3% of kids in the U.S. are bilingual (source: AP). Some states, notably Texas and New Mexico, have persevered with their bilingual programs and are now beginning to reap the benefits of a well-established educational structure.

In 2001, most of us welcomed the No Child Left Behind Act (NCLB), which passed with bipartisan support and included Title I, the program to help disadvantaged students. NCLB was based on the premise that setting high standards and establishing measurable goals can improve individual outcomes in education. The Act required states to develop assessments in basic skills and give these assessments to all students at select grade levels in order to receive federal school funding. Initially, the burden of some extra testing seemed a small price to pay for more funding, closing the achievement gap, and better overall educational outcomes. Insufficient funding and over-reliance on standardized testing gradually reduced support for the Act but not before it had spawned Obama’s Race to the Top and the creation of Common Core State Standards, while the mainstream media firmly established in the minds of the general public the concept that our schools were underperforming and that teachers were to blame. Despite the rhetoric, American public schools still do remarkably well in international, like-for-like comparisons but the achievement gap between white and most minority students persists.

The terrorist attacks of September 11, 2001 had an enormous effect on the conceived importance of world language education in this country. Overnight, our lack of language skills became an issue of national security and we rushed to find speakers of Dari, Pashto, and Urdu to fill intelligence gaps. Gradually, the panic subsided to be replaced by a new realization that we were living in a truly interconnected world where we could not ignore the possible consequences of our effect on anyone no matter how far removed they might seem from us. Even obscure, marginal groups now had to be considered. From this came widespread acceptance that the comprehension of world languages and cultures was a necessary part of our educational curriculum. The recession may have delayed the implementation of policy based upon this realization but it cannot be long before languages are afforded the place they deserve on the curriculum.

The development of cheap, reliable, global communications has had the most profound effect on the way we work and play. Fifteen years ago, none of us could skype from our cell phones with friends and colleagues on another continent, tweeting was only for the birds, and clouds held rain not data. The net result of all of these technological innovations is that we are now living in a society where national borders only limit the physical passage of goods and people. Every day, we interact internationally, often without even realizing it. Now, our educational curriculum needs to catch up with this reality by affording languages and cultural studies the importance they deserve, so that our children have the tools to not only succeed in this exciting new world, but to enjoy it too.

Software Focus on Reading
In addition to the humble book, publishers have launched an array of reading programs designed to help readers of all types acquire the skills they need