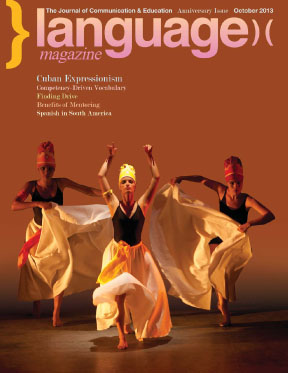 The ability to put yourself in someone else’s shoes, look at a problem in a new light, find a solution from a different perspective is an invaluable asset in almost every aspect of life. Yet, it’s not something we find easy to learn, even to the extent that it is often considered a gift rather than a skill. However, there can be few other activities that better help us to see situations from a new angle than learning another language.

There’s now a consensus that a second language is an important skill in our globalized world. In the 2008 Global Social Survey, 80% of respondents agreed or strongly agreed that children in the U.S. should learn a second language fluently before they finish high school, while 68% believed that learning a foreign language was as valuable as learning math and science. And every month, more evidence emerges in support of the cognitive benefits of multilingualism. However, little research has been conducted into the way in which linguistic skills enable people to gain new perspectives. Language shapes our thought processes so the ability to communicate, and even think, in another language necessarily confers the additional bonus of being able to consider situations from a different perspective.

Much of what we do in our personal and professional lives can be enhanced by a different perspective — it’s difficult to be a good friend, partner, salesperson, writer, or politician without being able to put yourself in other people’s shoes. Mahatma Gandhi was convinced that this ability could solve many of the world’s woes: “Three quarters of the miseries and misunderstandings in the world would finish if people were to put on the shoes of their adversaries and understood their points of view.” Although few of us are involved with world-changing negotiations as Gandhi was with the British colonists, his point resonates in so many of our personal, business, and community situations.
In all negotiations, you need to understand who you are dealing with, and what is important to them. The more you are able to get under the skin of the other party, the better able you will be to negotiate a mutually beneficial deal.

Even the learning process itself provides a valuable experience as students are more able to appreciate and empathize with the millions of English language learners going through a similar process in this country whilst improving their own understanding of English through the wider lens of languages in general.

And there’s more — learning another language enables us to think in new ways which not only give us insight into other cultures, but helps us to see our own culture and ways of thinking from a new perspective.

As we face the consequences of a federal government shutdown in the U.S., with the opposing parties in Congress refusing to negotiate and unwilling to put themselves each other’s shoes, maybe we would be wise to make a budgetary exemption for all of Congress to take intensive language immersion programs. Who knows? It might even get them talking the same language.