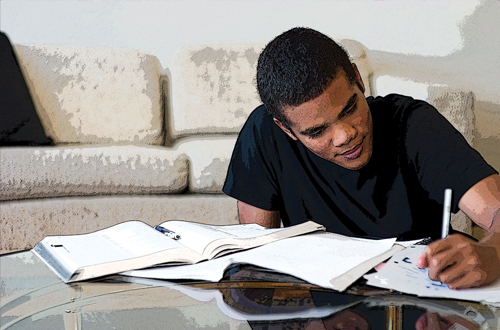 Courtney St.Onge on how Advanced Placement Spanish courses are opening up opportunities for Latino students

As a young child speaking Spanish at home, María Catalina Catalán did not yet see the possibilities of a dual-language life. In the U.S. she was beginning to pick up words and phrases in English, but her imagination — the stories she conjured up while looking at comic strips she couldn’t yet read — came to life in her first language, her parents’ language.

Catalán was seven when her family emigrated from Mexico and she enrolled in the Chicago Public Schools as a second-grader. By the time she had completed third grade, she translated for her mother at a parent-teacher conference in which the school recommended that Catalán be placed in a traditional English-speaking class.

“That was the end of my using Spanish at school,” she said, “until high school when I took AP Spanish. Of course, I still spoke it with friends and family but, academically, it was not a part of my day anymore.”

It was in her Spanish courses at Lane Technical High School that she was able to explore the grammar, mechanics and beautiful literature of her culture. As it has for thousands of Latino students across the country, that rich, rigorous course work opened her eyes to an array of opportunities where she could both enjoy and apply her language skills in college and a career.

“AP Spanish was one of the first times many of us in the class had been exposed to the grammar and the terms,” said Catalán, who went on to earn a degree from North Park College (now North Park University) in Chicago with a double major in early childhood education and Spanish. “Many of the students were already Spanish speakers, and we knew tenses and conjugation, but had not put those labels on it. By learning those terms, we were then able to apply them in Spanish and English.

The number of Latino students taking AP Spanish Language and AP Spanish Literature grew nearly 75 percent from 2004 to 2009, according to College Board data on Mexican American, Puerto Rican, and other Hispanic students. These college-level offerings in high school are broadening students’ experiences in their language and culture, as well as giving many of them the confidence to take on the rigors of AP in other subjects. Their success in courses in their native language also propels them to consider fields they might have considered out of reach before.

“I think the single biggest advantage (of Latino students taking AP Spanish) is that it really opens doors for them,” said Ken Stewart, who has been teaching Spanish for 21 years and is seeing growth in the numbers of Latino students in his classes and across his school, Chapel Hill High School in North Carolina.

“We definitely have seen this student population grow, just as it is reflected in the population at large,” he said. “Like a lot of other schools in our state and region, we’re trying to recruit more minorities into our honors and AP classes.”

It’s not only in Spanish-based AP classes that the numbers of Latino students are rising. The College Board reports increases in AP English Language, English Literature, U.S. History, Calculus AB and several other AP courses. Certainly some of that growth is attributable to the rising numbers of Latino students in U.S. schools, but many students and teachers also cite the experience in AP Spanish as an introduction to higher-level course work.

“If they can be successful in their own language, it gives them confidence to take on other AP courses they wouldn’t have considered. Maybe they didn’t think of themselves as AP students, but with this success, they’ll go on and try something like AP Psychology or AP Human Geography,” Stewart said.

For students who receive high scores on their AP exams, the college credit can put them well on their way to a minor or a second major in Spanish. That degree, along with their fluency, is making a difference in how they see their career options.

“My students are realizing they have a life skill that is very marketable,” said Stewart. “I had a student who has recently seen this. A four-year college may not be an option for her right now because of her documentation, but she has a valuable skill. She had been considering cosmetology as a career, but we talked about her potential to work as an interpreter for a medical center or a business.

“I tell all of my students they’re going to need Spanish, whether they’re going to medical school, enrolling in law school or managing a Wal-Mart store. This will be something you’ll use in your job.”

Employers are increasingly seeking to recruit and develop workers who are multilingual, said Andrés Tapia, chief diversity officer at Hewitt Associates, an international human relations consulting firm. With the rise in the Latino population as well as the emerging markets throughout Latin America, a job candidate who has both English and Spanish language skills is ever more valuable in almost any industry.

“But it’s more than just fluency in conversation,” Tapia said. “It’s understanding culture. That’s one of the reasons higher-level courses, such as AP courses in language and literature, are critical. If people are going to navigate and bridge the culture, they need to have more than just vocabulary. Spanish speakers also need to be able to use correct grammar, to write well and to understand the cultural references of both an Anglo and Latino culture.”

Marcelo Venegas-Pizarro certainly found that to be true. Like Catalán, he attended Lane Technical High School in Chicago in the 1990s. Having spent his first nine years in Chile, he was a fluent Spanish speaker when he arrived in the U.S. with his family; and he learned English in school and his neighborhood during the following years.
As a teenager, Venegas-Pizarro excelled in school, but he particularly enjoyed his AP Spanish Literature course. “I discovered so much more about what my culture had to offer than even my parents had shown me,” he said. He went on to obtain his medical degree from the University of Illinois College of Medicine. Now he works as medical director of the ACHIEVE Program, Lutheran Medical Center’s HIV outpatient program in Brooklyn, N.Y.

“I almost speak more Spanish than English now,” he said. “The patients we have are 90 percent Spanish speaking. There’s no way I could have known as a high school student how much my language and appreciation of culture would factor in my career. I grew up in a mixed neighborhood with Latinos and African Americans. I never expected this is what I’d be doing. But it has been a wonderful experience.”

Marcela Muñoz, another Lane Technical High School alum, regards her classes in AP Spanish as instrumental in developing her communications skills in two languages. She joined her parents in the family business, the Aguijón Theater in Chicago, where she is artistic director. The company’s mission is to produce theater in Spanish, but it also stages a day for English-speaking audiences.

“Now we’re more aware of language and keeping it alive,” said Muñoz, who was born in Colombia and came to the U.S. with her parents when she was eight years old. “But when you think 20 years ago, it wasn’t the case. In my high school classes, that experience of thinking analytically and critically was helpful, not just in Spanish and not just in literature, but in other realms too.”

“I live in a bilingual world. Most of my work in the arts is in Spanish, but I’m also living and working in English. I have a daughter now, and I’m trying very hard to help her keep both languages,” she said.

That bilingual world is a reality for so many American students, whether they were born in the U.S. or migrated here with their families. For some whose first language is Spanish, their vocabulary may be sufficient, but literacy is more challenging. Learning grammar through courses such as an AP language class helps improve their skills in both English and Spanish. “It’s a dangerous assumption on the part of students who have grown up in Spanish-speaking homes that they completely understand the language without formalizing that education,” Tapia said. “It’s one thing to learn it at home, another to learn it in depth and master it.”

Luz Adriana Pérez, who teaches AP Spanish in San Antonio, Texas, said her students may initially lack confidence and skills when they begin a class at this high level. But as their understanding improves, their confidence builds.
Latino students also bring a different perspective on the language or the literature to the classroom. Their fluency and experiences, family stories, or other ideas benefit all the students in the room, Stewart said. “It makes for a richer experience for everyone. I’ll often ask them, ‘Is there another word for that?’ or ‘Is this how you would say this in your country?’ … I think having native Spanish speakers in our predominantly English-speaker classes helps the majority of students not to be intimidated by native speakers. And it lets students who may not feel confident in every class to be among the high achievers in this class.”

One of Pérez’s students at Thomas Edison High School, Darlene Ortiz, said she believes she’ll be more successful in AP English Literature classes because of her experience in an AP Spanish Literature course. “It was amazing to learn the literature and read these stories. While we were working on them, I also learned the rhetorical terms and how to analyze them. I know that will give me an advantage as I go on to English to do the same thing with new stories and authors.”

Pérez said she’s very proud of how she and her students have learned together. “At the beginning of the year, my students didn’t really dream,” she said. “They don’t consider college a possibility. For some it’s a challenge because of immigration. For others it seems too costly or just too hard. But we study stories of struggle, beautiful pieces from cultures that ring true to them. They learn, and they dream. For some, at the end of the year, they take that inspiration and believe they can do it.”

María Catalina Catalán, too, has made her dream come true. She always felt called to be a teacher and now is passing on what she’s learned. After starting her career as an elementary school teacher, she enrolled at the University of Illinois, Chicago for a master’s degree focusing on dual-language education. Today, she’s sharing her expertise in a classroom at Whittier Elementary in Chicago.

“When I started my career, I was often put in bilingual classes because I could speak Spanish,” she said. “I wanted to know how to better teach children. I hope I am now giving children the kind of instruction I would have liked to have gotten as a second- and third-grader and the kind of education I want my child to have.”

Courtney St. Onge works as a journalist and communications consultant in Charlotte, N.C., writing for the College Board and other organizations and publications, particularly those related to education or faith.