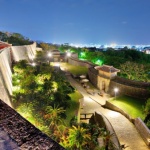 The culture of Okinawa, Japan is quite distinct from other Japanese islands. It became a part of Japan in 1879, but has a strong American influence because of three decades of military occupation following WWII. Today, 20% of the island is made up of over 30 U.S. military bases. This history has resulted in the near extinction of the Okinawan language, called Uchinaguchi, which was systematically suppressed when the island was annexed by Japan. Because of ubiquitous U.S. presence, Okinawans perceive more of a need for English competence than for learning the language of their ancestors. Once the U.S. ceded control of the island back to Japan in the 1970’s, the island underwent changes that many Okinawans perceived as another occupation, but this time instead of U.S. military projects, Japanese business took over the island. Japanese power over Okinawa can even be seen in the language politics: Uchinaguchi was long considered a dialect of Japanese despite the two languages having less than 60% in common. In 2009 UNESCO recognized Okinawan as its own language along with five others spoken in the region, all of which are endangered. Native speakers are aging and dying off.

Efforts to revitalize Uchinaguchi on the island are regularly stifled by the local government’s indifference towards the language.

“Ever since the Japanese annexation of Okinawa, our languages were considered to be second class, not to be spoken in public,” Shinsho Miyara, professor emeritus of linguistics at the University of the Ryukyus and chairman of the Ryukyu Heritage Language Society told The Washington Post.

Nonetheless, the language is praised for its folkloric value and is featured in local theater. Some schools offer language classes, such as Okinawa Christian University. Because Uchinaguchi is a low priority in the political field, the cultural field is the site of language revitalization and resistance to its extinction. One benefit of promoting the language through culture is that, unlike the government, the culture can have influence overseas.

In the fall, a special event on Okinawan literature in Washington D.C. brought together leading scholars to discuss cultural production from the island.

“Local things such as Uchinaguchi (Okinawan dialect) and Okinawan culture were not treated well in the past, but Okinawan literary people and artists have come to use Uchinaguchi more often recently,” literary scholar and president of Meio University, Katsunori Yamazato remarked in Washington.

Efforts to preserve and teach about Uchinaguchi and indigenous culture aim towards, not only calling for Okinawan culture to be recognized as distinct from Japanese culture, but also towards recognizing and appreciating cultural diversity within Japan.