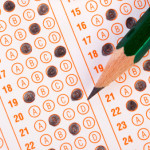 Some states, such as Utah and California, very clearly allow students to opt out of annual testing for any reason, according to a research brief published by the Education Commission of the States. Others, such as Oregon and Pennsylvania, allow students to be excused from testing to accommodate religious beliefs. However, widespread protests against the Common Core-aligned standards began last month when states began administering exams created by the Partnership for Assessment of Readiness for College and Careers (PARCC) consortium. Thousands of students walked out on Common Core related testing. Peggy Robertson, an administrator of the national United Opt Out group explains, “Opt-Out is an act of civil disobedience. The one way we have to vote for saving public schools is by refusing these tests. The truth is it doesn’t matter [what the state policy is]. It’s an act stating we reclaim our public schools. Opt-out allows us to vote in that way.”

Last year Indiana became the first state to drop the Common Core State Standards and reject the Common Core-aligned statewide annual test, followed by Oklahoma and South Carolina. However, the consequences of unsure decision making turned the controversial test into a battle twice as big. Under federal law, the state of Indiana had to develop their own state standards for testing, resulting in a rushed process, and more testing hours for students. NPR reported, “Indiana squeezed the normal life cycle of a test – pilot, field, real- into one, massive exam that clocked in at 12 hours, more than twice as long as the previous test.” Indiana’s test had to cover all the new standards, include additional items in case of badly written questions that would be removed after, and have a pilot section that wouldn’t count towards students’ scores in order to make up for lost preparation time. After complaints about the 13-day testing plan, the State Board of Education was able to shave three hours off the new test, which students are taking this week.