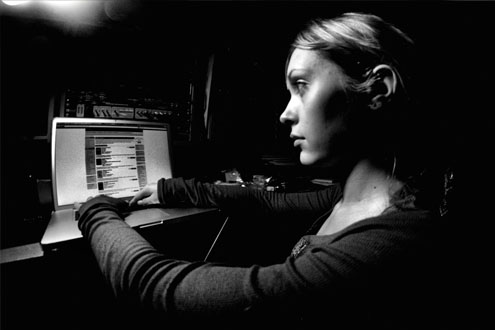 Contrary to popular opinion, there is no evidence that teenagers are less engaged in literacy activities today than teenagers of the past. Teenagers today do just as much book reading as teenagers did 65 years ago, and it appears that they are more involved in reading and writing in general when we include computer use in the analysis. The true problem in literacy is not related to convincing reluctant teenagers to read: It is providing access to books for those living in poverty.

How Much do Teenagers Read?
It is a common perception that teenagers don’t read as much as they used to. A look at data from NAEP questionnaires administered to 17-year-olds from 1984 to 2008, as well as an earlier report (Link and Hopf, 1946) seems to show that this is true (Table 1). There is some improvement between 1946 and 1984, and then the decline begins. 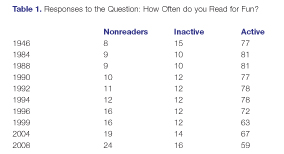 Asking questions like “how often do you read for fun,” however, may seriously underestimate how much teenagers read.

First, some respondents may not consider the kind of reading they do as really reading. Mellon (1987) administered a questionnaire to ninth graders asking if they read in their spare time. Although 82 percent said they did, Mellon concluded that respondents “didn’t trust” that the questionnaire was really dealing with self-selected pleasure reading. The respondents did not consider the kind of reading they liked as “legitimate” (p. 30). Here are three illuminating comments by her subjects: “I don’t like reading except for comic books or magazines,” “ …I hate reading unless it’s a magazine about something I like,” and “I don’t like to read much except for romance, mystery, and scary books” (p. 30). Of the 66 respondents in Mellon’s study who claimed they never read in their spare time, 49 checked several categories of leisure reading when asked what they liked to read. Rothbauer (2011) reports similar findings, concluding that “when we shift our research focus to teen-generated perspectives on reading habits, preferences, and attitudes, we are likely to find a deeper and more meaningful engagement with texts than is found in the popular adult discourses on teen reading or in the quantitative findings of large-scale national surveys.”

Second, other, more focused measures of “reading for fun” give results that differ from those in table 1. In several studies respondents were asked if they read a book yesterday. For teenagers, the available data suggests no decline between 1946 and 2004 in book reading, with a dip in 1999 (Table 2).

Other measures also include estimates of the average number of minutes teenagers say they read (Table 3).

Just considering book reading, there is little difference between the 1946 estimate and the most current (2010) estimate. Considering all types of reading, there is also little cause for concern. The only true drop is the clear decline in reading newspapers and magazines. The winners, if we also include reading websites, appear to be teenagers in the Roberts et. al. (2005) study, who spent over an hour a day reading.

Let’s look at what teenagers do on the internet, other than school-work and reading websites (Table 4).

Table 5 compresses “email,” “social” and “instant messages” into one “written communication” category, and “games,” and “YouTube” into one “entertainment” category.

Teenagers in the 2005 and 2010 reports spent more time on written interaction than on entertainment. Communication with their peers is clearly important to them. In terms of total “voluntary reading and writing,” teenagers in the 2005 report and the 2010 report are nearly even (99 and 96 minutes respectively, adding the “total reading” figure from table 3 to the “written interaction” figure from table 5). “Kids these days” appear to be reading and writing on their own an average of about an hour and a half a day.

We have no baseline data on letter and note-writing among young people, but I doubt that teenagers engaged in this much written social communication at any previous time in history.
Is this a good thing or bad thing? To be sure, they are reading peer writing, not Hamlet or the Federalist Papers. And they are writing to each other, not composing essays comparing and contrasting Edgar Allen Poe with Longfellow. We know, however, that reading means encountering new ideas and literacy development. In addition, writing on topics of deep personal concern stimulates cognitive development (Krashen, 2003) and can contribute to emotional health (Pennebacker, 1997). We should probably not dismiss written interaction on the internet as trivial.

The Real Literacy Crisis
Many teenagers are reading, but undoubtedly many are not. The tables presented above contain averages, not details, and even if there has been no decline in book reading and reading in general, we should always be concerned about non-readers.

Pundits have proclaimed that lack of interest in reading is because “kids these days” are lazy and easily distracted, and because schools are “broken,” continuing a long tradition of scolding teenagers and their schools (see below) without sufficient cause.
There are other possibilities. One is time pressure, which is considerable for teens, thanks to the increased demands of schooling and our obsession with testing; another is lack of access to books. For those living in poverty, books can be very scarce, as extensively documented and discussed in several places (e.g. Krashen, 2004, 2011).

Teens living in poverty who become dedicated readers manage to get access to books, but this is not the norm. Here are two recent cases that show that when access is provided, and young people start reading, very good things can happen.

In his autobiography, Geoffrey Canada, the founder of the Harlem Children’s Zone, credits reading for his own school success, despite growing up in poverty: “I loved reading, and my mother, who read voraciously too, allowed me to have her novels after she finished them. My strong reading background allowed me to have an easier time of it in most of my classes” (Canada, 2010, p. 89). Ironically, Canada promotes longer school days, increased accountability, and “data to drive instruction” for children of poverty (New York Post, October 13, 2010), despite the lack of data supporting these approaches and the overwhelming data supporting wide reading.

Liz Murray, as related in her autobiography Breaking Night, was also a child of poverty. As reviewer Kathryn Shanahan points out (Shanahan, 2010), Murray had access to books that her father took out from the local public library, which she says provided all she needed to complete elementary school: “Any formal education I received came from the few days I spent in attendance, mixed with knowledge I absorbed from random readings of my or Daddy’s ever-growing supply of unreturned library books. And as long as I still showed up steadily the last few weeks of classes to take the standardized tests, I kept squeaking by from grade to grade” (p. 112).

Homeless at 15, she was able to continue reading, again thanks to the library: “The public library on Forty-Second Street became one of my favorite places …I lost myself in the stacks. (p. 190).

Instead of dissing high school students, let’s make sure they have access to books and some time to read what they want to read. This is a far easier and far less expensive approach than the current mania for standards and testing. It may not be sufficient to ensure that all teenagers become readers, but it is certainly necessary.

Postscript: Our Proud History of Dissing Teenagers and High Schools
There have been complaints about teenagers and their schools for well over the last 100 years in the U.S.

In 1874, Harvard University instituted written entrance examinations, and more than half of the applicants failed. Ten years later, another study yielded the same results, which resulted in the establishment of remedial writing classes. As a result of an analysis of essays written in 1894, the Harvard Board of Overseers criticized high school writing teachers for the poor performance of the students. James Berlin (2004) points out that that these were the best students in the country attending the best university of its time (cited in “The Role of Prebaccalaureate Programs (AKA Remediation) in the California State University.”

According to Hofstadler (1963), Thomas Biggs of Teachers College wrote in 1930 that high school English classes resulted in written English that was “in a large fraction of cases shocking in their evidence of inadequate achievement” (Hofstadler, p. 304).
Ravtich and Finn, in 1987, asked What Do Our 17-Year Olds Know, and of course the answer was that they didn’t know much about history or literature. (Ravitch and Finn also reported that those 17-year-olds who knew more, read more: Those who lived in a print-richer environment did better overall on tests of history and literature, and there was a clear relationship between the amount of reported leisure reading and performance on the literature test.)

If we believe these reports, our high school students were terrible in 1874 and have been getting even worse ever since. Another interpretation is that there has been no decline in performance, that we have always been expecting too much, and are, for some reason, over-eager to scold teenagers and their schools.
For additional evidence against the claim that performance has been declining, see Bracey’s discussion of “knowledge nostalgia” in Bracey (2004).