Some Words for Bullying 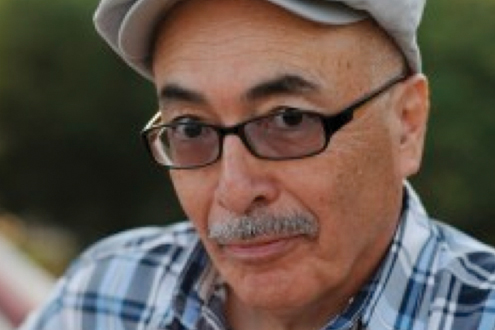 Poet Juan Felipe Herrera watched the news broadcast in dismay. Another child lost, this time in an after-school fight that turned deadly. As the story unfolded, memories of the bullying he experienced as the Spanish-speaking child of immigrants washed over him. Herrera, a professor of creative writing at the University of California, Riverside, vowed to act.

Now the California Poet Laureate, Herrera has developed i-Promise Joanna, a bullying-awareness effort that is an official Poet Laureate project. Named for ten-year-old Joanna Ramos, who died of injuries suffered in the Long Beach fight in 2012, i-Promise Joanna launched with nearly 100 fifth graders from Moreno Valley’s Towngate Elementary School who attended UC Riverside’s Gluck Day of the Arts in April.

Herrera hopes the project will spread throughout California schools, and beyond.
“I hope I can do something to stop it, to curb bullying in all its ugly forms,” the poet explained. “This was about Joanna, but it was also about me growing up as a little brown kid not knowing English, feeling ostracized and ashamed, slapped and picked on. When I saw Joanna, I saw myself. I said, ‘Juanito, that’s it.’”

Herrera consulted with the staff of the UCR Gluck Fellows Program of the Arts, a program funded by the Max H. Gluck Foundation that creates outreach opportunities across the Riverside region by bringing Inland-area students to UCR and sending graduate students to present free programs in art, music, dance, and theater at schools, nursing homes, and community centers.

Through the Gluck program, graduate fellows will introduce the i-Promise Joanna project with a brief video of Herrera and a classroom poetry activity that invites students to talk about the impact of bullying in their lives and elicits a promise to seek peaceful solutions to disagreements and speak up when bullying is observed.

“Schools and media tell us that bullying is a big problem, and that often violence is the solution of choice when there’s a conflict,” said Christine Leapman, Gluck program coordinator. “Because Juan Felipe Herrera is a fantastic poet, we knew we could make a difference by allowing him with his fabulous stories and charming manner to help kids understand how they can make a difference with bullying through the vehicle of creative writing. The children are coming up with super ideas about being heroes and standing up and stepping forward and being good friends. We are pleased to see they are thinking creatively and thinking about how they can make world a better place.”

David Campos, the UCR graduate student currently presenting i-Promise Joanna in Inland Empire schools, said the project is an effective tool for students to talk about how bullying makes them feel and to find creative solutions. “I think something positive will come out of this,” he said.

Fifth graders typically haven’t been asked for their thoughts on how to address bullying, Herrera observed. “Perhaps they should be. They are living this bullying ferocity. I don’t have the answers. They have the answers.”

Poetry can be powerful, Herrera added, noting that his creative writing students at UC Riverside have responded in verse to traumatic events such as the mass shooting at Sandy Hook Elementary School and the Boston Marathon bombing.

“The poetry voice is our inner voice,” he said. “It is very tender, very creative, very personal, very real. It can get angry, too. There is power there. It can unleash a volcano, or kindness. It has the ability to transform.”