Spanish as a Vehicle for Social Change 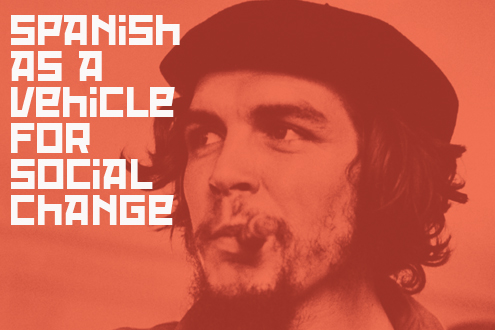 Kristal Bivona, Sandra Ruiz, and Daniel Ward discuss the movements and histories that made Spanish such an important language for activism

El pueblo unido jamás será vencido…
U.S.-based activists, whether Latin or not, have likely heard this popular chant at demonstrations. The Spanish language is ubiquitous in social justice circles in the U.S. for a variety of reasons, including Latin America’s strong tradition of grassroots organizing and protest, the U.S.-based Chicano movement’s triumph for worker’s rights through organized resistance, and the role of Spanish in Spain’s dictatorial past.

Today, the Spanish language is recognized internationally for its political importance, and news corporations are targeting Spanish speakers as a burgeoning consumer market. In recent years, news platforms with varying political slants have launched in Spanish, such as Russian-based RT’s Spanish-language debut in 2009 and its new Spanish-language website in 2014; Iran’s HispanTV launched in 2011; and U.S.-based MundoFox, launched in 2012. These news sources cater to the diverse political ideals of global Spanish-speakers.

“Latin America’s tradition of grassroots organizing and resistance has likely impacted Spanish’s role in social justice movements. During the 20th century, the U.S.’s unprecedented interest in the American countries south of the border coincided with repressive governments and catastrophic state-sponsored violence taking place in Latin America. The 1960s and 1970s proved to be an especially tumultuous time, with military regimes occupying most of the Southern Cone, a horrendous student massacre in Mexico in 1968, and the systematic genocide of indigenous people in Central America. However, a wave of revolutionary spirit immediately following the Cuban revolution made Che Guevara an international icon, inspiring many to resist their governments’ repression. Word about human-rights abuses and resistance spread internationally as exiles fleeing repressive military regimes settled around the world and testimonial literature describing horrific human-rights violations became internationally available in translation. Rigoberta Menchú’s story, published in I, Rigoberta Menchú won her the Nobel Peace Prize in 1992, bringing international attention to the struggle for rights and social justice in Latin America. Nonetheless, the disparity between the kinds of events that make the English-language news cycle and what the Spanish-language media cover is wide, and one blatant example of this disparity is the coverage of the 43 Mexican college students who were forcefully disappeared by Mexican authorities, known as the Ayotzinapa tragedy. Despite the story being largely overlooked by mainstream English-language media, demonstrations and events in solidarity with the survivors and parents of the disappeared held around the U.S. (see Language Magazine, May 2015, page 10) were bilingual, yet Spanish heavy. Ayotzinapa is also an example of how the Spanish language is a medium for solidarity and collaboration. As the search for the students led to the discovery of mass graves, forensic specialists from Argentina — a country still recovering from a military dictatorship under which an estimated 30,000 people disappeared between 1976 and 1985 — traveled to Mexico to help with identifying human remains. The region called Latin America is geographically huge and encompasses countless diverse cultures that in many cases have little in common other than the Spanish language. However, these countries’ experiences of facing political and economic instability, corrupt and even violent governments, and as a result, a history of organized resistance have contributed to the importance of Spanish among activists around the world.”

Kristal Bivona is a graduate student of Hispanic languages and literatures at UCLA and assistant editor at Language Magazine.

“In the United States, the Spanish language has had a long historical presence, and it became a part of this geographical space even before English came to be the language associated with this nation. And yet, since 1848, the language itself has suffered from linguistic imperialism and hierarchy. As has been documented through research and testimonios, in the recent past, children who spoke Spanish in schools were often mocked and physically punished for deviating from the learned classroom language. These experiences were also reiterated in the adult world, especially in the labor sector. As an educator of Chicana/o studies and Spanish language, I have gotten to know students whose parents recall being ashamed of not only their linguistic inheritance but their ethnic one as well. Many victims of this discrimination have chosen not to teach their children Spanish and have instead emphasized an ‘American’ identity within their family with the hopes of avoiding the repetition of some of those same painful experiences. Yet, in strong contrast to their parents, I am starting to witness a shift from a new generation of Chicanas/os and Latinas/os, who perceive speaking Spanish as an act of resistance against imposed monolingualism and nativism. Even for students who identify as Chicano/Latino but who did not grow up speaking Spanish fluently, there appears to be an inherent desire to learn and absorb the language. This generation has realized that especially in a city like Los Ángeles, where U.S. Chicano/Latino identity is deeply intertwined with linguistic identity, to learn and speak Spanish allows for linguistic and cultural access. Furthermore, in a heavily Spanish-speaking urban center like LA, it is not surprising that a Spanish-speaking activist/organizer working to unionize the majority of the labor sectors in the city is not only in high demand, but is often instrumental in ally building and cross-cultural connections typically marginalized and ignored by mainstream society. The power of language, especially Spanish, as a tool for civic engagement, reinforces these multifaceted identities and serves as a powerful catalyst for social, political and economic justice.”

Spain has long been a country of political contradictions, and therefore, a hotbed for change and radicalism, which, in turn, has influenced its language. Being an amalgamation of different kingdoms and cultures, much of which was occupied by the Moors (tolerant Muslims who accepted Christians and Jews within their society) for nearly a thousand years and then was heavily influenced by (at times extremist) Catholicism, it’s hardly surprising that Spain has been a breeding ground for political and social upheaval.

Even during its colonial era, Spanish society was bitterly divided between the ruling elite and the peasants, many of whom, especially those from the poverty-stricken regions of Andalucia, Extremadura, and Galicia, migrated to America in search of a more equitable life. Descendants of these migrants such as Simon Bolivar and Fidel Castro later went on to become instrumental in the struggle against colonial oppression.

By the beginning of the 20th century, fascist, communist, and anarchist movements had gained popular support in Spain. These divisions culminated in the Spanish Civil War (or Revolution) of the 1930s during which socialists, communists, and anarchists were joined by international brigades of idealists in their battle against fascism. Alongside the war, millions of workers collectivized the land and took over industry to pursue their vision of a new society. The participation of world-renowned writers including Hemingway and Orwell helped to spread the story of this idealistic struggle worldwide.

Paradoxically, Castilian Spanish became a tool of oppression soon after the war under the dictatorship of Franco, who banned the use of regional languages like Catalan and Basque in his quest for absolute control over the diverse nation. It was not until the 1970s that Spain achieved democracy and a new constitution was created which granted autonomy to its various regions, giving the regional governments authority to decide issues on language and other fundamentals.

Spain and Latin America’s history of radicalism have given the Spanish language kudos in the political arena as well as the adoption by English of many Spanish political terms, like guerilla, a diminutive of guerra (“war”), which was coined during Spain’s Peninsular War against Napoleon; junta (literally a union, but also the grand council of state in Spain; compadre; and the use of the suffix -ista, which has now been commercialized with terms like fashionista, but gained popularity with the rise of the left-wing Sandinista movement in Nicaragua.