STEM in a Chaotic Classroom 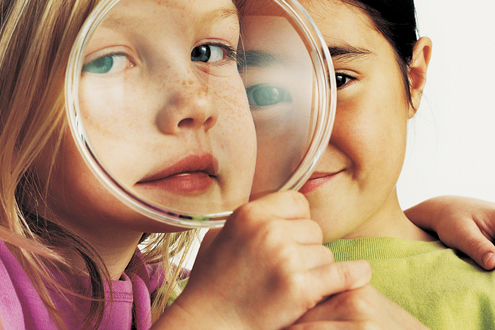 Not many people would think to compare STEM and English to cops and robbers. Most see the two roles as total opposites in personality, goals, and demeanor, but without the “bad guys,” where would the cops fit in? In a way, the same can be said for STEM and ELA. While most teachers know the subjects as poles apart, when they are combined, their differences create a balanced learning environment that is not only educational but fun—what we like to call “organized chaos.”

As we shift into a new age of education, students are no longer sitting at their desks filling in bubble sheets and reading out of textbooks. Although there is a need for direct instruction in all classrooms at some point, my fellow teachers and administrators at Horace Mann Middle School in Charleston, West Virginia, believe in—and have seen the benefits of—student-centered classrooms and project-based learning. After seeing a dramatic drop in face-to-face interactions with our youth thanks to social media and gaming, we must engage these young, impressionable minds in learning and explore new topics through teacher-guided self-discovery in a nontraditional classroom.

For an outsider looking in, my classroom might seem a bit chaotic, which I happen to love and embrace. Here, students are walking around, talking loudly, and asking each other questions, which is the exact opposite of what we’re used to as teachers. Handing students the reins isn’t letting go of control, and being a bit more hands-off doesn’t make me any less of a teacher. It’s a different style of classroom management that works by keeping students from falling asleep and zoning out during important lessons.

During our secondary education, teachers are conditioned to believe students must be sitting with their feet on the floor, eyes up front, and smiles on their faces for teachers to be in control. In other words, students should be silent and passive. That teacher-led classroom is missing the components that allow students to work together, a skill today’s employers see as necessary for all employees. While there is a time for both silent and passive, classrooms that are humming with excitement and action are often the most productive. Students who are engaged are involved. Involvement, to us, means action and application of learning.

Rotating Classes Are a “Win for Both Sides”
At Horace Mann Middle School, we have a rotating basic skills class built into our curriculum. As part of the daily schedule, each teacher chooses a performance task from the hundreds of cross-curricular, career-focused projects offered by Defined STEM, an online curriculum supplement. Each class spends three weeks focused on a holistic project that not only tests students’ cognitive ability, but also teaches them life skills and allows for hands-on career exploration. After three weeks, when students complete the task, they rotate and start a new project with a new teacher. In 18 weeks, students complete six in-depth projects, and we (the teachers) perfect our skills and save valuable lesson-planning time by teaching the same lesson six times to different groups of students.

“It’s a win for both sides,” said Shandon Tweedy, our assistant principal at Horace Mann Middle School. “Students are always gaining new experiences, and teachers get the rare option to choose to teach lessons they are enthusiastic about. And they save valuable time by not reinventing interactive lessons every three weeks.”

As students rotate, we often hear conversations between students about how much fun the project was and what they learned. As teachers, we know we’ve done a good job if classroom conversations are happening outside the classroom.

This format is exciting for the teachers because it plays to our individual strengths. For example, the algebra teacher may choose a prebuilt Defined STEM lesson on creating a bakery, which includes the math and business skills students need to become entrepreneurs. A science teacher who is passionate about fish might choose a lesson about building a fish tank, which teaches ecology, physics, and design.

The Classroom Is a Crime Scene
As an English teacher, you would think my task of choice would involve research followed by a report and presentation, but that’s not the case. I’m constantly trying to think of ways to incorporate STEM skills like problem-solving, formulas, and tech into my word-filled classroom.

For example, I love CSI and the detailed processes that go into solving a crime, so I chose a lesson called Crime Scene Investigator. I thought, “What is the best way to give my students hands-on experience when they obviously can’t go to a real crime scene?” Soon, the stairway of our school turned into a life-size crime scene complete with caution tape, splattered fake blood, and a lone shoe next to a body outlined with spray paint. I’ll never forget my students’ faces when they walked into the elaborate scene.

“I was super excited because I knew the kids were going to be totally sold on the lesson, and they sure were. The reality TV that the kids see, and the mysteries they have read laid the groundwork for huge enthusiasm with the students,” said Tweedy. “I loved the creativity that Lydia brought to the project with her personal touches, such as the book our ‘victim’ was reading. Our seventh grade looked at the stairwell staged for the class with envy, realizing it was part of an eighth-grade lesson. They immediately got excited thinking about the lessons to come their way.”

Students were transformed from eighth-graders into forensic scientists tasked with solving a murder. Using graph paper, students had to draw the scene to scale, placing each blood splatter and piece of evidence in the correct area. Using the Defined STEM task materials, each group of students became experts in areas including bite-mark analysis using paper plates, lifting fingerprints using a fingerprint kit from the local police department, and collecting DNA samples. Each specialist group then presented its findings to the class so every student was able to learn different aspects of analyzing a crime scene. The class prepared its evidence as a full crime report as if it were going to be analyzed in court. To solve the crime as a team, they used skills from all areas of study, including collaborative problem-solving, making precise measurements, creative writing, and presenting their research and findings to the class.

Setting up a crime scene may seem like it required a lot of prep time, but it didn’t. At Horace Mann, project-based learning isn’t viewed as a dreaded part of the curriculum or “one more thing,” because teachers see firsthand the benefits to students. It also doesn’t have to be hard or drain a teacher’s personal pocketbook. In fact, if done right, it’s pretty easy, cheap, and fun for not only the students, but the teacher, too.

I live by the phrase “reduce, reuse, and recycle.” I tell my students to go through their junk drawers to find things to use in their project, because buying new supplies won’t get them a better grade. Once grades are handed out and the projects are over, I deconstruct them and put everything in a box to use next time.

Experience Can’t Come from a Textbook
During the lesson, many students share what they’ve learned in my class with friends and family. Many go home and critically watch crime-scene shows on TV, pointing out “mistakes” producers make and debunking the “made-for-TV” reenactments. Becoming forensic scientists like the investigators on TV boosts the students’ confidence and empowers them to apply what they’ve learned in every situation.

Their biggest discovery? It takes a lot longer than 60 minutes to solve a crime. And while they are having fun trying to find an alleged murderer, they are actually refining 21st-century skills that textbooks can’t teach.

“Taking notes and reading about a crime scene, for instance, is nowhere near as powerful as creating a crime scene, and it is definitely not as engaging,” said Tweedy. “Plus, students have to work alongside others, which is a 21st-century skill they will carry with them far beyond high school. While the process isn’t always clean and quiet, the reward is cross-curricular career exploration and thinking in ways students never thought were possible.”

The basic skills rotation allows students to explore new careers they may have never known about. For example, when we started the crime scene lesson, students had no idea solving a crime involved so many people, from investigators to local police officers to the FBI to the BCA to forensic scientists and ballistics specialists. In their minds, everyone was a cop. By actually acting out each part in the scene, students were able to envision themselves as adults working in a careers. Because of the lesson, they can truly say they have as close to hands-on experience as they can get (as an eighth graders.)

While we don’t want our children growing up too fast (that’s the mom in me talking), we do want to expose them to as many opportunities as possible so they’re able to choose the path that fits them best. We also want students to be thinking about their futures far before they’re seniors in high school.

“I cannot tell you how many students have remarked to our teachers that they had no idea that some of the activities they are seeing with this program are actually options for a career,” said Tweedy. “To be able to inspire a student in that manner is, indeed, life changing, and that is what it is all about: inspiring the future.”

Teaching is not about theoretical knowledge. It’s about using everything at one’s disposal to accomplish one’s goals. Knowing the correct answer on a test or writing an essay doesn’t necessarily mean a student has mastered the content. Years of studying how to be the best cop on the force, or how to successfully rob a bank, doesn’t mean a person actually knows how to put those studies to use. He won’t know until he applies what he has learned and does it. The same goes for STEM and ELA: You can read all you want about combining the two in project-based learning, but until you actually try it, you’ll never know the outcome. So what are you waiting for?