The Cradle of Spanish 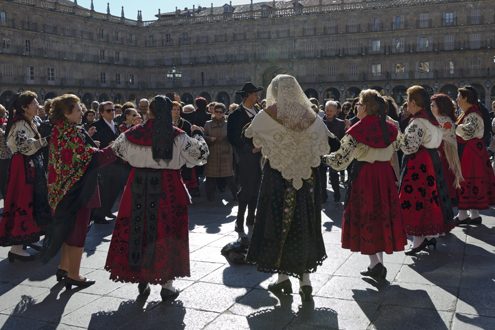 Daniel Ward visits the birthplace of the Spanish language

Castilla y León is not only the largest autonomous region of Spain, but also the birthplace of Castellano or Castilian Spanish which is now spoken by more than 500 million people worldwide. The language evolved from dialects of Latin spoken in the area after the collapse of the Western Roman Empire in the fifth century. It was first documented in central-northern Iberia in the ninth century and gradually spread south with the expansion of the Kingdom of Castile deeper into the Iberian peninsula. With Spanish colonizations from the early 16th century, the language of Castilla spread to the Americas, Asia, and Africa.

The area is awash with medieval history, which is still evident in many cathedrals, monasteries, castles, and fortified towns, many of which are preserved perfectly. The region has beautiful landscapes with forests and lakes, but it is known for its historic cities, particularly Salamanca and Valladolid, although Burgos, Segovia, Ávila, Soria, León, Palencia, and Zamora are also destinations in their own right.

Salamanca
A small city of about 160,000 inhabitants, Salamanca’s great historical importance is due to its university, one of the oldest of Europe, its outstanding beauty, and its rich cultural heritage. History seeps out of its streets and buildings, but it’s balanced by the youth and diversity of its students, who make up about a quarter of its population.

The city’s historic center has important Romanesque, Gothic, Moorish, Renaissance, and baroque monuments. The Plaza Mayor, with its galleries and arcades, is particularly impressive. Visitors could spend weeks marveling at the architecture but they should also leave time to savor the city’s wonderful restaurants, mesóns, and bars, which heave with students and locals enjoying some of the best tapas in the world.

Colegio Delibes
Recognized by the Instituto Cervantes and situated in a historic building five minutes’ walk from the Plaza Mayor, Colegio Delibes has been recently restored and equipped with the latest technology. The school features 20 air-conditioned classrooms, a video and conference room, an audio lab, a library, and an IT room with free internet and wireless access. There is also an enclosed patio with a Castilian well where students can relax with coffee and socialize during breaks.

The school has an authentic international ambience (3000 students from 55 different nationalities during last year) and a complete program of extracurricular activities, most of which are free of charge. Accommodations vary between host families, student residences, shared apartments, studios, and hotels. It is known for its intensive, wide-ranging courses (at least 14 choices), small class sizes, ten different levels of learning, and personalized attention.

Since 1997, Colegio Delibes has offered summer programs for students with the possibility to obtain university credit.

ISLA
Since 1990, ISLA has helped over 35,000 students go from strength to strength in their Spanish, as well as giving them a home from home in beautiful Salamanca.

ISLA is a community as well as a school, and it’s made up of the ISLA team — teachers, administrators, guides dedicated to keeping the school humming with happy students, and the students: adult learners, teenagers, gap-year travelers and university students — all looking for a boost. Perpetual polyglots, they’ve ventured from all corners of the globe.

The school is located on the lovely Plaza de los Basilios, occupying a tranquil spot opposite a park with tall, old trees and the San Esteban convent. The building is crafted in the province’s distinctive golden Villamayor stone and is fully refurbished inside with glass and chrome. The feel throughout the school is bright, light, and welcoming, taking inspiration from the eye-catching Havana color palate of blues and purples in ISLA’s logo.
Courses range from four to six hours daily leaving time for extra curricular activities like city tours, day trips, dance lessons, cooking, and enjoying tapas. Welcome parties, weekly culinary surprises, excursions, Dieter’s Drive, paella, and potluck dinners round off the highlights of the ISLA experience.

Mester
Every year, more than 4,000 students from more than 40 different countries visit Mester, which has been running courses in Salamanca for more than 20 years.

The school’s promise to all students is to make sure that every course is stimulating, up to date, and above all, effective. In order to keep this promise, it’s put together a team of highly qualified and committed teachers, and modern teaching materials, aiming to create an education center which not only has regular classrooms but also real meeting points for students to exchange experiences and knowledge.

Aside from the standard Spanish programs, Mester offers a huge variety of specific courses, including medical Spanish, business Spanish, literature, tourism, journalism, restaurant management, as well as complete flexibility in the organization of study abroad programs, which includes a wide range of socio-cultural activities, transfers, medical insurance, and guides. Of particular note are its advanced programs for teachers of Spanish as a foreign language (E/LE).

Tía Tula
Accredited by the Instituto Cervantes as a school of high quality, Tía Tula is a lovely Spanish school with two centers both situated right in the historical university center of Salamanca. Just like Salamanca, Tía Tula combines its classical framework and facilities with the modernity of its people and their methods. Inside are pretty, comfortable, and pleasant classrooms with views of the monumental zone of the city.

The school offers an impressive academic program delivered by highly qualified and experienced teachers who also specialize in teacher training. It also has an efficient administration and management team that ensures, among other things, high-quality accommodation and a wide range of extracurricular activities to complement the lessons and and allow students to live the Spanish language in the magical streets of Salamanca — all with a warm, human, and personalized treatment.

Both teachers and administrative staff do their best to make sure students can make the most of their Spanish programs and have an unforgettable, complete linguistic-immersion experience in Salamanca and in Spain.

Valladolid
The capital of Castilla y León, Valladolid is the sixth-largest city in Spain and less than an hour by high-speed train from Madrid, but it still operates on a siesta schedule with long lunches and a pure Castilian lifestyle. It was home to Miguel de Cervantes when he wrote Don Quixote and of Christopher Columbus until his death. It was also the birthplace of Queen Isabel la Católica and the site where the Portuguese and Spanish met to divide the new world into two empires.

It has one of the most important sculpture museums in Spain, and its famous Easter-week processions attract thousands of spectators. The city is historic, traditional but friendly, making it an inviting destination for students.

La Casa del Español
While offering its students quality Spanish teaching, La Casa del Español understands that this language education must be combined with a true cultural contact with Valladolid. In order to facilitate this, the school strives to offer access to all that makes the city unique: its people, open and hospitable; its important historic and literary heritage; its gastronomy and wines; and its dynamic cultural life.

Accredited by the Instituto Cervantes, it offers qualified teachers and helpful staff, interesting cultural activities, cooking workshops in its own kitchen, a multicultural environment, and easy access to heritage cities.

The mission of La Casa del Español thus blends the two concepts of language and cultural experience, with a personal and caring group of professionals working toward this.

Language Magazine editor Daniel Ward traveled to Castilla y León in November 2014 to organize programs for the magazine’s local Topanga Spanish School and can’t wait to return with a group of American students.