The Secret of Mayan Success 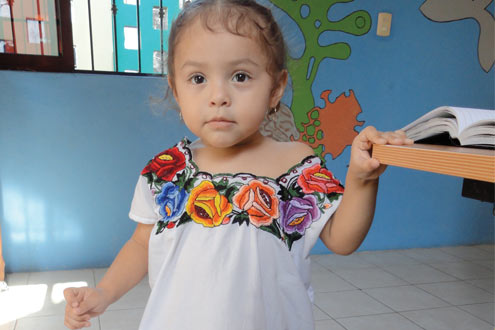 Around the world, people are looking to the Mayan calendar for keys to the future of the planet and the mysterious changes prophesized for December of this year. According to numerous cable TV shows, the Mayan civilization and its extant structures, such as the famous Chichén Itzá pyramid, have supernatural connections to otherworldly beings. Millions of tourists visit Mayan ruins each year and wonder at the impressive capabilities of pre-Columbian people who pinned astronomy and mathematics before the Europeans. While the mythical qualities of Mayan history and culture continue to captivate and provoke the world, many fail to realize that the Maya were not conquered and that they still live throughout Southern Mexico, the Yucatán peninsula, Belize, Honduras, El Salvador and Guatemala. Some Mayan communities enjoy relative seclusion in rural areas where they can communicate entirely in the Mayan language. In other communities, cohabitation with Spanish speakers and international tourists has changed the way Mayan is spoken.

Today there are five spoken variations of the Mayan language: Quichean-Mamean, Huastecan, Ch’olan, Q’anjobalan, and Yucatecan, which is the variation spoken on the Yucatán peninsula. Classic Mayan was written in hieroglyphics, and then with colonization came a written form of Mayan using Latin script, which is still used today.

Mayan language preservation becomes especially compromised in the context of an international tourist destination, like the beach town of Tulum on the Yucatán peninsula 90 minutes south of Cancún. Tourists flock to Tulum for eco-friendly vacationing and a glimpse into pre-Columbian civilization with its Mayan ruins and sacred subterranean freshwater rivers called cenotes. Walking in Tulum, it becomes apparent that many of the restaurateurs and store owners are not Mexican, but Italian, English, German, Argentine, Brazilian, or from the U.S. The intersection of international tourism and the Mayan culture raises important questions about the state of Mayan language preservation in Tulum in specific, while opening to broader questions about preserving indigenous languages in places that favor the learning of foreign languages to cater to tourists. International tourism adds another layer to the post-colonial scenario of an indigenous community that has already survived colonialism (in this case, Mayans survived Spanish colonialism and the creation of the Mexican state) and the imposition of the Spanish language. Today, like many parts of the global south, Tulum is experiencing a cultural colonization as a result of international tourism. The culinary scenes in such places are a testament to the shift in cultural production, which serves international gastronomy, such as wood-fired pizza and paella, and not the regional cuisine; in Tulum dishes like cochinita pibil and relleno negro must be sought out.

How does indigenous language preservation operate in the context of international tourism? In the case of Quintana Roo a multi-faceted movement including all levels of education and government are promoting the Mayan language. At the university level, there are Mayan language classes, but as Hilario Chi, author of La vitalidad del Maaya T’aan and professor at the Universidad de Quintana Roo in Chetumal points out, the university system is not the heart of the preservation movement.

“Currently the issue of Mayan language teaching is weak, and there’s no center offering pedagogical or didactic training for the Mayan language,” Chi explains. “However, it’s worth mentioning that other institutions, like the Center for Investigation and Superior Studies in Social Anthropology (CIESAS), offer a Masters in Indoamerican Linguistics, which teaches skills that are applicable to Mayan language teaching.”

In Chi’s program at the university, many students study Mayan out of personal interest or because they want to teach the language abroad. Medical students take Mayan to serve the monolingual Mayan populations in Mexico.
In primary and secondary schools in the area, Mayan language courses are available for students as a second language option. Today, there are also bilingual schools that instruct in Mayan in addition to Spanish. Chi points out that many schools boast the title of being bilingual without functioning bilingually in practice. Not only are many bilingual teachers unable to teach the Mayan language, many schools create an environment that favors Spanish.

Despite government investment in Mayan cultural preservation, many communities do not take ownership of programs that are imposed from above. Chi elaborates: “Mexican politics continue to bet on unification, on one culture, on one language despite the numerous legal documents that say otherwise. The communities and the governments make these documents count. Without government involvement, there’s no true promotion or encouragement to use indigenous languages and without the community there’s no insistence on complying with the laws that protect their linguistic rights.”

With flagging support from those in power, local approaches to promoting the Mayan language and culture come into play. The municipal government in Tulum launched an initiative in 2009 to train public employees in basic Mayan so that they can better serve the Maya living in the municipality. Part of that initiative implemented Mayan courses in the state career training school, the Instituto de Capacitación para el Trabajo del Estado de Quintana Roo (ICATQR), a publicly-funded vocational school that offers certificate programs and other extension courses. In addition to Italian and English, they have a small Mayan program.

Down the street at the public library, director of Education, Arsenio Cetina, has a Mayan language and culture program for children. Most of the 91 students are heritage learners. The public library’s program integrates Mayan mythology, poetry, music, and other literacy in Mayan.

Cetina notes a generational difference in the way heritage learners of his generation used the language and the relationship that his students have with Mayan, but that close geographical differences also affect the way that Mayan is used. The variation of Mayan spoken in Tulum is heavily influenced by Spanish while smaller Mayan towns within an hour’s drive use a more ancestral variation.

Considering the Mayan language’s place in Tulum, Cetina remarked, “Tulum is a city that receives many people, and I feel that as a tulumense, I’m doing my little part by giving these Mayan language classes to preserve it, and we would like it if the people who are arriving and moving to this small town take us into account. We have a root that’s an identity and we have to add to it to preserve it.”

Meanwhile, when expats buy hotels and restaurants, they hire the Maya to work behind the scenes. A beach server at Punta Piedra Resort and a Mayan astonomer, Ignacio Estrada Morales, has witnessed the extent to which the living Maya are not taken into account.

“People have their myths about the Maya. Practically no one comes here to see how the Maya are today, but what they were in the past. A lot of people buy into the idea that the Maya don’t exist; that the ruins are all that’s left and what remains in the hieroglyphics, but the culture today is immense.”

With budding programs for heritage learners, it’s possible that 2012 can be the year of the Maya for reasons beyond the infamous prophecy. Many local movements are growing in strength and visibility to alert the community at large of the importance of indigenous language preservation in Mexico.

For more on the Mayan language and resources, visit http://www.native-languages.org/fammay.htm.