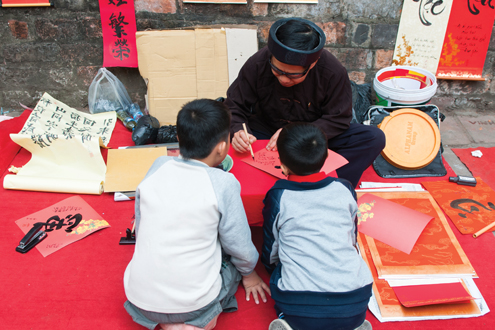 Although China boasts a history of over 5,000 years, the modern nation-state we know today is only about 65 years old. Communist Party chairman Mao Zedong proclaimed the establishment of the People’s Republic of China on October 1, 1949, after the Chinese Civil War. Subsequently, the illiteracy rate of China, which stood at roughly 85-90% when it was first calculated at the turn of the 20th century, began to decrease significantly from the 1950s onward. By 1959, illiteracy rates among youth and adults (ages twelve to 40) had fallen from 80% to 43%, and they have been steadily decreasing since. China is now expected to reach near-universal youth literacy in 2015. China’s literacy success has been described as “perhaps the single greatest educational effort in human history” (Peterson, 1997).

History of Literacy in China
Illiteracy in pre-1949 China was not only bolstered by poverty, remoteness of a region from market centers, cultural privileges of male education, and minority discrimination, but also by reluctant leaders who feared the politically empowering influence of literacy in the hands of the non-elite. When a campaign to “sweep away illiteracy” began in the first days of the PRC, literacy education was banned in areas that had yet to be politically secured. It wasn’t until the late 1950s that mass literacy took the center stage of educational policy with collectivization of the countryside, and not until 1978 was the prevention of new illiterates through basic education made a high priority. This prevention set the direction for China’s literacy trajectory, as the youth literacy rate increased much faster than that of Chinese adults, who still currently make up 11% of the world’s illiterate population.

In 1978, the State Council stressed universal primary education to eliminate and prevent lapses back into illiteracy. Attention was redirected to the definition of literacy as knowledge of 1,500 characters for rural residents or 2,000 characters for urban residents. Language and education policy held different standards for rural children, calling for flexible schedules and half-day schools, as well as a lowered minimum character recognition for literacy qualification. These efforts were viewed as necessary first steps in the modernization of China and establishment of the nation’s economic power on the world stage.

As well as increased literacy rates of Chinese speakers in China, English-language literacy is on the rise. It is estimated that there are as many people learning English in China as the whole population of the U.S. Nonprofit public institutes promote Chinese language and culture and support local Chinese teaching internationally. The UNESCO Confucius Prize for Literacy was founded by the PRC in 2005 in order to recognize the activities of outstanding individuals or governmental agencies and NGOs whose work in literacy serves rural adults and out-of-school youth, particularly women and girls. The winner is awarded two payments of US$20,000 and a medal, as well as a study visit to literacy-project sites in China, reflecting the country’s establishment as a voice of authority on matters of literacy.

China is currently at the halfway point in a ten-year plan for education reform and development that specifies additional financial support to grant equal education opportunities to students living in rural areas and areas of ethnic minorities. More resources are being used to improve the quality of teachers in rural areas, and the graduation rate of students in China’s nine-year compulsory education is set to increase by 4%. However, problems still remain among minorities, women, and an increasingly illiterate adult population. China is home to over 50 ethnicities and 120 dialects, often so varied that they are unintelligible to speakers of other vernaculars. Part of China’s early nation-building approach included protection of minority languages, but in order to encourage minority groups to assimilate into the Han society and adapt to a globalized environment, attention has turned to two languages: Chinese Putonghua, which became the primary medium of school-based instruction in 1956, and English.

China’s “[traditions] of elite language usage, definitions of modernization, and approaches to state building have empowered a single standard language politically, legally, socioeconomically, and even aesthetically” (Zhou, 2004). Putonghua and standard Chinese characters legally became the languages for governance, education, mass communication, and commerce through the 2001 National Common Language Law. While the law states that national minority-language use need not be restricted, it does mandate that announcers, actors, performers, teachers, and government employees must pass state-specified Putongua examinations.

According to the 1986 Compulsory Education Law, China is committed to a system “implemented uniformly by the state,” with “no tuition or miscellaneous fees.” However, the number-one expected expense for parents in China is reportedly education. For rural families especially, almost all earnings go toward education and the hope that their children will attend institutes of higher learning. Mrs. Cao, the mother of Wu Caoying, who participated in a New York Times article following her costly path to higher education, explained, “All the parents in the village want their children to go to college, because only knowledge changes your fate.” This does align with the goal of creating a drive for rural students to exit poverty through education, but reflects the reality of varying quality and cost of education that is supposedly equal in access to all.

The Case of Cantonese and China’s Linguistic Nationalism
Although China’s Communist Party has raised literacy rates across the board through centralized education policies and the standardization of Mandarin, or Putongua, as the language for schooling, it has used language-related rulings as a means of weakening regional loyalties and forging a sense of common identity, which for some means a loss of heritage languages and culture. In areas farther in distance from Beijing, the country’s capital, such as Taiwan and Xinjiang, government rulings successfully ousted local languages and made room for Mandarin immersion in schools.

Mandarin is now also slowly gaining ground in Hong Kong, a historically Cantonese-speaking region, showing the growing influence of mainland China. “People will eventually be forced to speak Mandarin in schools and official environments of Hong Kong, just like in Taiwan and other parts of China,” Chin Wan, a professor and leader of the Hong Kong Autonomy Movement, told the Australian Special Broadcasting Service. The mainland movement against deviations from Mandarin is working against itself in Hong Kong and galvanizing resistance. Cantonese activist and editor Lao Zhenyu says language matters for more than just a political reason: “Cantonese is not just a language, but for native speakers it is part of our identity.” The Chinese government has tried to insist that Cantonese isn’t a language and to suppress its use. In turn, Cantonese is beginning to take on a central role in Hong Kong’s counteraction to the authority of mainland China.

George Chen, a Yale World Fellow and author of This Is Hong Kong I Know, commented on Cantonese becoming a vehicle for the democratic movement in Hong Kong: “Many young Hongkongers consider Cantonese their language [and] a strong signal of how much the younger generations care about their unique Hong Kong identity,” says Chen. “The Hong Kong identity problem has attracted attention from Beijing, which has repeatedly said Hongkongers should recognize themselves first as Chinese, not Hongkonger.”

As literacy rates rise and Mandarin grows in authority as the national language of China, more and more dialects and cultures run the risk of disappearing. In our globalizing society, this is happening increasingly frequently and at a cost that the world is currently calculating. When asked about the case of Hong Kong and Cantonese, Victor Mair, a professor of Chinese language and literature at the University of Pennsylvania, told Business Insider, “It’s the same in China as it is in other parts of the world: Quebec, Belgium, Ireland. Language matters.”

Judy Heflin is an editorial assistant at Language Magazine.