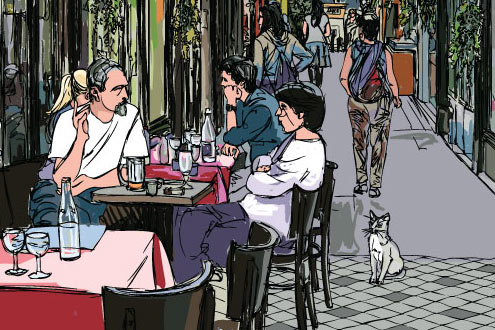 The Certificat d’Enseignement du Français Langue Etrangère (CEFLE) has been created for people with a good knowledge of the French language (French mother tongue or equivalent) who want to follow a theoretical and practical course with the goal of teaching French to speakers of other languages. This course is an introduction for teaching French and can be used by those teachers without a recognized qualification. The CEFLE is recognized by UQO (Université du Québec en Outaouais) and provides university level credits.
During the course, candidates will become familiar with teaching methodology and acquire practical skills for teaching French. The program includes teaching practice classes, learning from observing experienced teachers in their classrooms and a comprehensive set of coursework.

The CEFLE is an intensive, full-time, four-week, five days a week course. On top of the 120 hours required at school, teaching candidates are required to produce extensive assignments.

Requirements included as an integral part of the full program:
• 100 hours of interaction between the candidate and instructor
• Input at ILSC
• Tutorial support
• Supervised lesson planning
• 6 hours directed observation of lessons taught by experienced French language teaching professionals
• 20 hours of teaching practice under supervision
• Feedback and comments after teaching practices.
• Peer observation
• An additional estimated 100 hours for required readings, research, assignments and lesson preparation
• It is recommended that candidates are 20 years or over. They should have an understanding of the French language specifics and have an adequate level of oral and written French to be able to follow the course and teach properly. For non-French native speakers, the DALF (or equivalent) is required.
• Candidates should have the potential to become effective teachers and to successfully complete the written assignments and the teaching practicum
• Candidates should have an academic background equivalent to University entrance level
Please note that although a University degree is not a pre-requisite for the CEFLE course, most of language schools require one to teach.

Andris Berzins, who took oath as Latvian president two months ago, said in an interview with the Russian-language Chas daily he will not pretend to forget the Russian language like his predecessor did.

Berzins’ predecessor Valdis Zatlers, who spoke Russian fluently, ignored any attempt by the media to speak in Russian to him. Latvian has the status of the state language in the republic, whereas Russian is considered a foreign language.

“I have spoken and I will speak Russian,” the recently elected president said. “Of course, I will speak Latvian during official speeches, when it is obligatory according to the protocol. But in some unofficial situations, when it’s easier to deliver my opinion in Russian, I will speak Russian, or English, or German. Why not?”
“It may sound clichéd, but we must learn foreign languages… Knowing Russian may be an advantage in many situations, and it’s unwise to reject it,” Berzins said.

Russians have been Latvia’s largest ethnic minority for the last two centuries. According to the 2000 census figures, more than 700,000 people, or almost 30 percent of the population, declared themselves ethnic Russians.

At the same time in Kazakhstan, the Ministry of Culture proposed a draft law to introduce some amendments to the state’s language policy.

It was quickly labeled as a move to further reduce the scope of use of the Russian language, which enjoys equal status with the Kazakh language, according to the country’s constitution.

The new move was supposed to make all interactions that citizens have with government bodies to be in Kazakh, as well as all internal documentation of state institutions. All visual and business-related information (advertisements, signs, price lists, forms) was also to be provided solely in Kazakh. The changes were set to be introduced in 2013.

A new institute devoted to promoting Chinese language and culture will enable the College of William and Mary, established in 1693, the second-oldest university in the U.S., to expand its global reach and strengthen its focus on internationalization in the 21st century.

The Confucius Institute at William & Mary (WMCI), a collaborative program in partnership with Beijing Normal University (BNU) and the Office of Chinese Language Council International (Hanban), will work with the College to offer Chinese language and culture courses, provide teacher training, and support study abroad. The institute will also partner with local schools to promote Chinese language learning.

“We are delighted to partner with Beijing Normal University and to prepare our students to be leaders in a rapidly changing global society,” said Provost Michael R. Halleran. “By fusing together some of our strongest academic assets, and at the same time showcasing the College’s role as a resource for the Commonwealth, the Confucius Institute is an obvious next step to enhancing William & Mary’s international reach.”

Beijing Normal University is one of the top 10 universities in China with 16 top-ranking degree programs, including education, psychology, Chinese and math. The university is also one of the oldest in China, founded in 1902. Since the program started in 2004, more than 300 Confucius Institutes have been opened worldwide, according to Hanban, the Chinese government agency that promotes language and culture, and provided $150,000 in startup funds as annual support for the Institute.

“I am truly excited to support the development of the new Confucius Institute at William & Mary,” said Stephen Hanson, the College’s new vice provost for international affairs and director of the Reves Center. “Understanding China’s role in the world in the 21st century is more important than ever before, and the Confucius Institute we are building in partnership with Beijing Normal University will make a vital contribution to the College in this respect,” he said.

The Institute will also serve as an important resource for the Commonwealth. Throughout Central and Southeastern Virginia, demand for Chinese language instruction is beginning to emerge at the K-12 level. For example, Virginia Beach and York County Public Schools offer Chinese courses at the high school and middle school levels, respectively. Qualified instructors to teach those courses are needed. In collaboration with William & Mary’s nationally ranked School of Education, the WMCI will provide certified teaching training and professional development for Chinese language teachers.

Community engagement, locally and throughout Virginia, is another core component of the WMCI. The institute will assist in offering language courses in Williamsburg-James City County middle and high schools and also in the larger community. Community partners, such as the Colonial Williamsburg Foundation, will work with WMCI to organize Chinese cultural activities.