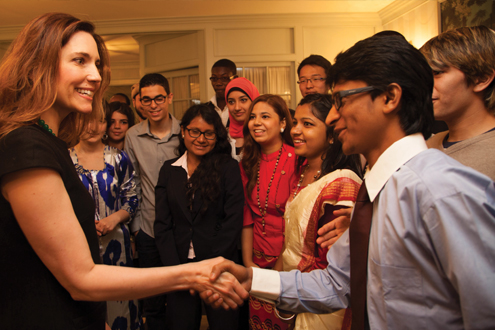 The impact of transnational education (TNE) on host countries is overwhelmingly positive, according to a major new research project by the British Council and the German Academic Exchange Service (DAAD). The research, conducted by McNamara Economic Research and Dr. Jane Knight of the University of Toronto, focused on Botswana, Egypt, Hong Kong, Jordan, Malaysia, Mauritius, Mexico, Turkey, the United Arab Emirates, and Vietnam.

The research is the first in-depth look at the impact of TNE in the countries where it is delivered, and was launched at last month’s “Going Global” conference for leaders of international education.

Kevin VanCauter, British Council higher education advisor, explained the findings: “We set out to investigate the impacts of TNE on the host country, both positive and negative. One of the most striking findings in the study is that, overall, respondents did not believe that the negative features or potential risks of TNE were important or applicable, the exception being the high cost of TNE programs compared with local programs.

“What has come out is that survey respondents believe that TNE is providing increased access to higher education for local students and contributing to improvement of the overall quality of higher-education provision. For students, the number-one rationale driving them to enroll in TNE is to improve professional skills for career development, and 61% of respondents believed that studying in a TNE program would increase their earning potential relative to studying in a local program. The research also provides evidence that TNE students understand the importance of awareness and knowledge about international issues and events and they believe that TNE can help them gain this international understanding.”

A report on the findings analyzes the views of students, graduates, academics, policy makers, and employers in ten host nations. The study found that TNE students most valued the international outlook and analytical skills they gained from the programs and viewed them as a way of developing their professional skills and furthering their careers. Nearly three quarters (72%) of TNE students believe the programs offer good value for money, despite often costing more than local alternatives.

Students generally — as well as those on TNE programs — see TNE as an affordable alternative to full-time study abroad and regard its most positive attribute as the opportunity to gain a more international outlook. Though the students had opted not to study abroad for their entire program, the option of a short-term study in another country as part of the program was an important reason for choosing a TNE program, cited by 70%.

But the report, Impacts of Transnational Education on Host Countries: Academic, cultural, economic, and skills impacts and implications of program and provider mobility, found a surprising lack of awareness of TNE courses within host countries. Only 39% of non-TNE students were aware of the programs and less than half (46%) of non-TNE academics.

“In many cases, even students and faculty members in institutions that offered twinning, franchise, double or joint degree programs were not aware of these opportunities. This indicates the low profile that TNE programs have, and/or the lack of understanding or the confusion of what constitutes a TNE experience and the benefits it can offer,” says the report.

TNE is growing rapidly across the world. According to recent data from the Higher Education Funding Council for England, there are now more international students taking degrees offered by English universities in their home countries than there are studying in England — with 545,000 students registered on TNE courses in 2012–13.

TNE students said the most important reason for enrolling on the courses was to improve their professional skills for career development. Other important factors were access to a specific qualification, improving their intercultural competence, and the prestige of the TNE institution or overseas education system.

“Branding and profile of the foreign partner or parent institution have an influence on a student’s decision to enroll in a TNE program, as the perceived importance of the qualification and the status of the awarding institution ranked in second and fourth place respectively as key motivations for TNE students,” says the report.

On teaching methods, the TNE students overwhelmingly believe that the style is different from traditional programs’ styles, contrary to statements by academic staff (both TNE and non-TNE), who say there are no major differences. The students perceive their analytical thinking to be the most-enhanced skill from programs that rely more on critical thinking and voicing of opinions.

For a substantial group of students, internships and work placements form part of the TNE study experience. More than two-fifths (42%) of students report to having had work-experience opportunities during their studies, often as a mandatory part of the program.

“The connections between TNE programs and the labor market are more significant than expected and dovetail well with students’ career-development aspirations and employers’ demands for graduates with work experience,” says the report.

At a national level, TNE was thought to be having the greatest impact by providing increased access to higher education and improving the quality of local provision. There was some concern among higher-education experts that where TNE institutions offered programs already available locally, there was a limited impact on skills gaps, and the study found that TNE does not generally appear to be providing different programs from those offered locally.

However, students were firmly of the opinion that TNE qualifications gave them an edge in the jobs market, mainly because of the prestige of the foreign universities and the fact that they had developed an international outlook.

In Germany, the research will be presented and discussed at the conference ‘Transnationale Bildung (TNB): Ziele und Wirkungen’ (Transnational Education (TNE): Goals and Impacts) in Berlin, June 2. For more information, visit www.daad.de/tnb.