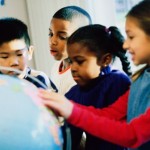 Although the Modern Language Association reported a 6.9% decrease in college foreign language class enrollment in 2013, dual language elementary programs are on the rise. It is a common assumption that students in bilingual education programs will come out with a mediocre handle on two languages, resulting in no mastery and lower overall performance. However, researchers say that students will at first be successful in their native language while scoring below grade-level in their second language, but by middle school the gap disappears and bilingual students greatly surpass the test scores of monolinguals. “It helps for parents to understand that,” says Virginia Collier, a professor and researcher of dual language education at George Washington University. “There is a recognized achievement gap in the second language, but it closes.” As these elementary programs thrive, they must adapt the Common Core standards to each school’s unique bilingual program. This involves very detailed translations of the specific language of the Common Core as well as cultural consideration of reading material in other languages. The process first began with Spanish translation and educators found that the Common Core meshes very well with the language heavy curriculum of bilingual programs.

Former principal of Foster Elementary in Baldwin Park, Lorraine Perez, told the Southern California Public Radio (SCPR), “I started reflecting as I walked around my classrooms on my campus as a principal then, and just really thought, ‘You know what? A lot of the [Common Core] stuff is happening, and more so in my dual language classrooms.’” The need for a translation of the standards became apparent. “The Common Core was written with the mainstream English native student in mind,” bilingual educator Silvia Dorta-Duque de Reyes said. “I have no doubt about that.” Reyes, the former biliteracy coordinator for the San Diego County Office of Education, initiated the idea and, with a team of two Spanish-English linguists, completed the project. But translation itself was not the only necessary adaptation for the Common Core to be properly applied in a dual language setting. A culturally adept reading list was also an important step. “Quality books in the authentic language carry the soul and culture of the people, and that is embedded in the language,” Reyes continued.

In response to the idea of eventually adapting the Common Core to Mandarin, German, Japanese, and other languages, Kenji Hakuta, professor of education at Stanford University, said, “[The] standards have always taken the [approach] that they are for all students. The question has only been a question of implementation. What accommodations must be made for different subgroups of students so they can attain the standards? It’s not about learning by watching the teacher stand in front of the class. It’s about using language to learn content.”