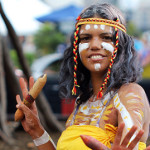 Recently, the New South Wales (NSW) Aboriginal affairs minister Victor Dominello announced $185,000 in funding for the development of an app to support the maintenance and revitalization of five Aboriginal languages local to New South Wales. Like the U.S., Australia has no official language but is largely monolingual in English. However, before the 18th century the country was home to over 350 Aboriginal languages. To this day about 70 of these languages have survived and all except roughly 20 are highly endangered. In response to this, the NSW Government created a plan for Aboriginal affairs in 2013. Called OCHRE – opportunity, choice, healing, responsibility, empowerment – the plan aims to support more Aboriginal students in their schools and communities, especially through the teaching of Aboriginal languages.

After 20 years of pushing for Australia’s indigenous languages to be taught, language program coordinator Diane McNaboe says she is finally starting to see a big breakthrough. The integration of smart technology and mobile apps in language learning may help endangered Aboriginal Australian languages and set the stage for other indigenous language speakers to do the same.