Indians push to add 38 more languages to their constitution. 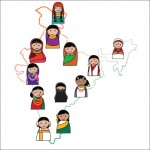 The inclusion of English has been the most controversial. Critics of adding English as an official language point out that it already receives preference over Hindi and other Indian languages in civil service examinations. As of now English is not protected by the Eighth Schedule, but it does function in India as an official language— it is used in Parliament and has official status in some states. The Indian government has yet to decide if it will include any additional languages in the Eighth Schedule.

Back to News Page.