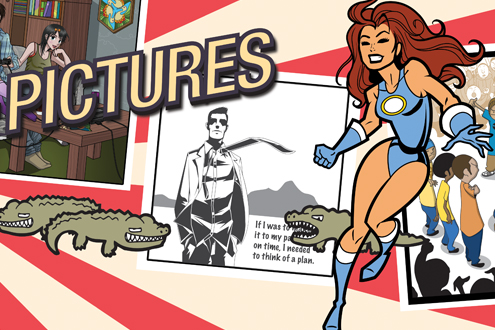 The recent introduction of the Common Core State Standards in the U.S. and their emphasis on teaching with authentic functional texts that we use daily, such as magazine articles, websites, labels, emails, and menus, is reminiscent of communicative language-teaching methodologies. Though competence in reading with the aim of understanding all everyday and business-related texts in the target language is important, it should be our aim as educators to promote critical engagement with literature by linking reading to students’ daily lives and world knowledge to make them lifelong readers. Beyond that, meaningful transaction with literature fosters holistic learning of a new language while offering new insights, ideas, and excitement to young people.

Students can develop language competence and social skills engaging with literary texts of all forms and genres: novels, poetry, drama, films, picture books, comics, and graphic novels. Today, literacy is no longer restricted to the canonical fictional texts but involves visual art forms as well. The New London Group (1996) developed the concept of multiliteracies focusing on different modes of representation. They noted that the visual mode of representation is powerful and closely related to language. Multiliteracies also create a different kind of pedagogy in which “language and other modes of meaning are dynamic representational resources, constantly being remade by their users as they work to achieve their various cultural purposes.”

Research from the past two decades has shown that comics and graphic novels in particular may have a beneficial effect on readers in terms of retaining information, improving basic language skills, fostering comprehension, and interpreting for meaning (Carter, 2008; Gunning, 2005; Kilickaya & Krajka, 2012). These studies suggest that schemata can be stored both verbally and visually, and that the mixing of words and images has a major impact on cognitive psychology and therefore also on language learning (Paivio, 1991). A longitudinal study by Poerschke (2005) also demonstrated that, with some training in visual literacy and effective prompting, reluctant male students who are easily daunted by longer written texts can be motivated to engage in reading using graphic novels in the classroom. Hammond (2009) established that high school seniors responded to graphic novels in many of the traditional ways, such as critical analysis, but they adjusted their normal reading process to include image analysis. This proves that students can explore meaningful dimensions of their worlds through creative arts such as comics and graphic novels.

From the aforementioned studies, one can come to some first conclusions: Studying graphic novels can support language learning in the same way as reading traditional literary works and other prose texts. The combination of visual representations and narrative construction may help the student to learn to communicate in a foreign language. Additionally, for those learning a second or foreign language, graphic novels can be used to foster intercultural learning. Through engaging with graphic novels and participating in subsequent in-class activities, students arrive at a better understanding of the other culture and different attitudes and opinions. By changing their perspectives, students can attain socio-cultural knowledge, develop respect, learn to understand divergent opinions, and eventually master intercultural interaction (Hecke, 2013). Profound insights into target cultures may also help to make learners aware of stereotypes, and to diminish prejudice. In a brief word, graphic novels, as an effective and productive tool for teachers, provide ample opportunities for language learners to interact with highly engaging, multimodal texts of numerous genres to foster multiliteracy.

Graphic Novels
A graphic novel is a book-length fiction or nonfiction story produced in the style of a comic book, with some form of continuity (Chun, 2009). Belonging to the family of sequential arts, a graphic novel can be a single story, yet it may also be a collection of loosely related comic strips. A graphic novel may tell emotional or socially critical stories, like Shaun Tan’s The Arrival. It may describe chapters in the lives of famous people like Malcolm X: A Graphic Biography by Andrew Helfer and Randy DuBurke, or refer to recent political developments, like Pyongyang: A Journey in North Korea or the Persepolis series, in which Marjane Satrapi describes the Iranian revolution and move to Europe. Some graphic novels are pictorial adaptations of literary classics, while others are influenced by the Japanese tradition of manga.

One of the most distinctive features of graphic novels is the notion of the “readerly gap” — the highly imaginative space that lies between the words and the pictures/panels, or in the mysterious syntax of the pictures/panels themselves, or between the voices of the narrators in the stories (Styles & Watson, 1996). This imaginative space allows for a highly individual interpretation of the verbal and visual mode and the reader’s construction of meaning. Thus, the understanding of graphic novels involves reading and interpreting the text in the speech bubbles and captions with the aid of the clues given by the pictures. The decoding of the text and pictures is interrelated: text adds to pictures, and pictures aid textual understanding by contextualizing the communicative situation or visualizing the topic of the text. Readers thus have to switch back and forth between text and images for multiple interpretations and construction of multifaceted meanings, demanding discussion of these meanings in the classroom.

Graphic novels therefore help to develop multidimensional language competences, as they require dynamic discussion, ask for close reading, demand negotiation of different values, and may also lead to creative or analytical written tasks in order to grapple with the complexities of readerly gaps. In addition, dealing with graphic novels in the second-language classroom helps students foster literary and visual literacy by learning how to decode the interaction between a verbal and a visual mode. Students on all competence levels learn how to analyze different genres, and stylistic and rhetorical devices, as well as to interpret illustrations and text.

The combination of narrative construction and visual design in graphic novels provides readers with extended storylines, creative expressive modes, complex character development, and moral themes, as do traditional literary works and other prose texts. Moreover, the readers’ mental imagery evoked by the graphics may help students relate to a story beyond the written words and help them interpret the text. Instead of reading official presentations of sophisticated sociopolitical issues with indifference or passive acceptance, students’ imaginations and intellects are challenged and activated by engagement with multimodal texts that present alternative representations of these issues. Reading these powerful and appealing narratives gives students a sense of ownership over these texts through their intellectual and emotional engagement with them. Students can thus be transformed by their encounters with a story in ways that can alter habits of thinking or living. Graphic novels should be used more often in second-language classes at school and unreservedly be integrated into the curriculum.

Lina Sun got her PhD in curriculum and instruction (concentration in literacy and language education) and graduate certificate in rhetoric and composition from Saint Louis University, Missouri. Her research includes critical literacy, children’s and young adult literature, and second-language education. She teaches and does research at the School of Foreign Languages, China University of Petroleum (Beijing).