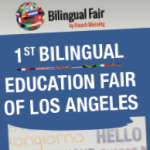 Language Magazine is sponsoring Los Angeles’ first Bilingual Education Fair to be held on May 3rd at the University of California Los Angeles (UCLA) campus. Organized by French Morning, with the support of the French  Embassy, the event provides the opportunity for up to a thousand parents of potential students to learn more about dual-language education. Editor Daniel Ward will be on the panel for the event’s opening roundtable on The Bilingual Brain & the Advantages of Being Bilingual at 10 am. The event provides the opportunity for parents of potential students to meet all the actors of the bilingual education community, including schools, publishers, and education businesses. Bilingual education opportunities and dual immersion programs have increased for children in Southern California, the state with the highest number of English Language Learners (ELLs) who have a heritage language other than English. The upcoming Bilingual Education Fair will give a comprehensive outlook for those who are interested in the growing trend.

In 1998, public school bilingual education was banned in California in order to direct students towards full-time English use as quickly as possible. However, a bill that passed in the state Senate last year by Senator Ricardo Lara will place a measure on the November 2016 ballot to repeal the bilingual education ban and allow school districts to decide whether or not to change their current system. Over the last 16 years it has largely been found that successful bilingual education programs teach English as well as if not better than the current monolingual system with the added benefit of fluency in a native or second language. The programs however, do come come at a cost and, if introduced en masse, have the risk of being poorly executed. Still, there are a growing variety of reputable bilingual education options in Los Angeles that aim to ensure its students with the globalized workplace advantage of bilingualism.