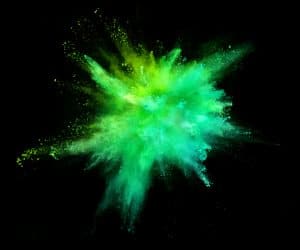 In a recent study, published in Psychological Science, Martin Maier and Rasha Abdel Rahman at the Humboldt University of Berlin examined  how native language influences what we consciously perceive. Groups of Greek, German, and Russian speakers (103 people) were shown a rapid series of shapes and were told to look out for a grey semi-circle. This semi-circle appeared alongside a triangle in different shades of blue and green, and participants later reported whether they saw a complete triangle, a slight or strong impression of the shape, or didn’t see it at all.

Native Greek speakers, who distinguish categorically between light and dark shades of blue, showed boosted perception for this contrast compared with a verbally unmarked green contrast. German speakers, who have only one category for light and dark shades of blue, showed no differences in perception between blue and green targets. The behavioral consequence of categorical perception was replicated with Russian speakers, reproducing this novel finding. We conclude that linguistic enhancement of color contrasts provides targets with a head start in accessing visual consciousness. “Our native language is thus one of the forces that determine what we consciously perceive,” claim the researchers.

For the studies on Greek- and German-speakers, Maier and Abdel-Rahman also used electroencephalography (EEG) to compare their participants’ brain activity during the visual tasks. The EEG results supported the idea that native language influences a very early, automatic stage of visual processing—a concept that has been previously disputed.

“The present results show for the first time that … our native language—and the color categories we apply within it—can influence whether we consciously perceive a stimulus or not,” claims the study.

The differences in blue vs. green detection rates between Greek/Russian and German participants were not big in statistical terms. Still, “language… seems to play an active role in perception and helps to optimize it in the long run,” the researchers concluded.