“But teacher, he speaks with an accent!”
My memories sometimes take me back to my ESL classrooms and my highly motivated students with a hunger for English and a thirst for knowledge of the world at large. I remember showing them fascinating, inspirational TED Talks by Shabana Basij-Rasikh,1 or May El-Khalil,2 or Joseph Kim.3 They all seemed thoroughly absorbed in the content of the TED Talk and in their admiration of the speaker’s courage, sincerity, or determination. And then, as if to throw cold water on a warm classroom atmosphere, there was sometimes one student who would say, “But teacher, he/she speaks with an accent!”

Countering Myths about English
At this point, I would explain that English is a world language, with native speakers, nonnative speakers, users, and learners all over the world; so they, my students, needed to understand different speakers with various accents. Then I would test their knowledge of English in the world by asking them what they thought was the world’s largest English-speaking country (demographically). Invariably, they would all say “America!” (the U.S.). I would surprise them by informing them that it is in fact not the U.S. but India, where over a quarter of its more than a billion people speak English.

My students were not alone in thinking that the U.S. is at the center of the English-speaking world. However, the reality is that as an inner-circle country, the U.S. is in the minority of English-speaking places worldwide. The concept of the inner circle is part of a paradigm developed by Kachru (1985), who posited three concentric circles (see Fig. 1). The inner circle, consisting of Australia, Canada, Ireland, New Zealand, the UK, and the U.S., is where English originated and was first disseminated, where it predominates as the national or official language (or one of two in Canada), and where it does not share its status with indigenous languages. The outer circle consists of countries such as India, Nigeria, Pakistan, Singapore, and many others, where English was spread through a later period of colonialism and has developed into official status, which it sometimes shares with indigenous languages. Outer-circle Englishes are also sometimes referred to as world Englishes. And in the expanding circle, consisting of countries such as Brazil, Thailand, Germany, and Mexico, English is a foreign language with no official status. Most countries are in this outermost circle. Although it has been challenged and updated, the Kachru model is the most enduring paradigm of the English language worldwide. But how is the Kachru model related to ELT? One answer is that it codifies a hierarchy that has always existed in which inner-circle Englishes are privileged and Englishes from the other circles are effectively subjugated. How this affects ELT materials, including listening, is what we explore in this article.

Demographics Matter
One can put the minority position of the U.S. in perspective by considering the role of English in just three countries—India, China, and Nigeria. India, the world’s largest English-speaking country, has an English-speaking population that is larger than the entire population of the U.S., with at least 350 million speakers (Crystal, 2004, in Srivastava, 2010) and English as one of its official languages. China had as many as 300 million users and learners of English by 1995 (Yong and Campbell, 1995) and presently has at least 600 million learners of English (Qiang and Wolf, 2005). Nigeria, demographically the largest country in Africa with over 200 million people and dozens of languages, has only one official language: English. Nigeria has more English speakers than the entire population of the United Kingdom (Pinon and Haydon, 2010). Nigeria also has the distinction of being the home of the world’s largest producer of motion pictures, with many movies in English and English-based creole.

The anglophone Caribbean, a major English-speaking region spanning over 25 countries and territories, would straddle the inner and outer circles but is not included. I offer the exclusion of this region as one example of the injustice, inadequacy, and inaccuracy of the original Kachru model. Perhaps because he recognized that it did not include all Englishes, Kachru transformed his original model. It now comprises an infinite number of concentric circles with the highest proficiency being at the center and lower proficiency in the outermost circles (Graddol, 2006). In this model, anyone has the potential to be included in the inner circle. In my view, it regards the English language as consisting of all English speakers worldwide, irrespective of their sociohistorical relationship to the language.

Yet, despite the prominence, institutionalization, study, and use of English worldwide, the concept of the inner circle as the center of the English language continues to predominate. This has significant implications for many aspects of ELT, such as the creation, publication, and distribution of materials, including those used for teaching listening.

Some questions that may come to mind as we consider diverse Englishes in listening materials are:

Incorporating Diverse Englishes in Listening Materials
English speakers in the outer and expanding circles far outnumber those in the inner circle. This is especially noteworthy in a rapidly shrinking world, where individuals and communities from disparate countries and cultures are brought into more frequent interaction through migration, commerce, education, entertainment, and electronic media. It is also significant in diverse countries like the U.S., where all Englishes are represented. This is partly because the U.S. is a country of immigrants, as well as the recipient of visitors of many types, including international students. In such an environment, it is reasonable to help English learner (EL) students understand diverse Englishes. English is the first and only world language, in that it is spoken as a native language worldwide and has a global population of nonnative speakers that surpasses its native speakers.

As a world language, English is spoken in myriad accents. Given the global demographics of the English language and the likelihood that ELs will use their English with other nonnatives (Seidlhofer, 2005) and/or with world English speakers, listening materials should include diverse speakers with diverse accents. Even though most English speakers worldwide are outside the inner circle and much, if not most, English-language communication takes place in the two outer circles, it is the inner circle where the vast majority of EL materials originate, including listening materials. These materials are overwhelmingly based on inner-circle models and usually feature native speakers from the inner circle. However, it is my contention that EL materials, especially for listening, should take an inclusive approach that incorporates diverse Englishes from all three circles. In this way, ELs can develop the ability to understand Englishes from outside of the inner circle.

In order to take a more inclusive approach to the use of listening materials, teachers may need to adapt their own thinking to a broader view of the English language and consideration of an increasingly globalized world. It seems that Cooper (2020), in her discussion of anti-racism, would agree: “How are we best preparing ourselves to model healthy citizenry for future generations? There is no single path or step-by-step guide with all of the answers. It will take a multipronged approach. Fundamentally, we must start with ourselves before we can teach and authentically engage others in this necessary work.” So in ELT, one prong would be the incorporation of diverse Englishes. Moreover, listening material featuring diverse Englishes more closely reflects the real world in the present and the future. In a narrowing world, we will all need to learn to understand each other—culturally and linguistically. The basic human need to be understood reminds me of the lyrics to Xscape’s song “Understanding“ (1993), about two young people trying to bridge a communication gap.4

What I need from you is understanding…

Many ELs learn and use English because their objective is to understand and be understood by the greatest number of people worldwide. Because English is spoken so differently around the world, it seems that the development of listening skills that extend beyond inner-circle English would help students accomplish this objective.

Students (and their parents) tend to believe that their teachers present the highest-quality, most valuable, and generally best material and that what their teachers do not present is less valuable, of lower quality, or even negligible. So, if we don’t take an inclusive approach to teaching listening, students will only value inner-circle English and not other Englishes.

By teaching only inner-circle English listening, we create a hierarchy in which students will not see value in the other Englishes. Treating nonnative and world Englishes as “less than” native Englishes can have a negative effect on the linguistic self-esteem of EL students, who, by definition, are nonnative English speakers. Even though students tend to trust their teachers to select and use the most appropriate materials with them, my students’ comments about “accent” reflected a preference for inner-circle listening material.

Another reason to take an inclusive approach that incorporates diverse Englishes is that there is a tendency to associate attitudes toward a language with attitudes toward speakers of that language. The inclusion of diverse Englishes can contribute to more inclusive attitudes toward traditionally marginalized English-speaking populations worldwide. This is meaningful, given that the outer circle, the anglophone Caribbean, and most of the expanding circle are populated by people of color. This comes to mind in light of recent awareness of the role of race and hegemony in many areas of society, including education. In my view, we need to extend this awareness to ELT, and diversifying listening materials is a way of doing so. Bryan and Gerald (2020), in their article in this series “The Weaponization of English,” make a similar point: “We acknowledge that there is much work to be done with regard to eliminating anti-Black racism and decentering Whiteness…“

In recent years, more diverse listening materials have become available. Publishers will publish whatever they believe will sell most successfully. So, it is our responsibility as ELT professionals to help raise awareness among them of what materials are beneficial and what materials we would like to select for our students. But we don’t always have to wait for the publishers to make these materials available. Through resources such as Democracy Now!, NPR, American Public Media, C-SPAN, the BBC World Service, CGTN, and TED Talks, among many others, we can bring the world into our classrooms and create our own authentic listening materials using diverse Englishes.

Are we going to forego the use of speeches by Nelson Mandela, Malala Yousafzai, Wangari Maathai, Desmond Tutu, or Greta Thunberg, all of whom have either won or been nominated for the Nobel Peace Prize, just because they are nonnative or world English speakers? If we do, we will be forfeiting valuable opportunities for our students to learn about their world and hear some examples of English at its most eloquent.

Given the global demographics of the English language and the multitude of accents in which it is spoken, it is imperative that EL listening materials reflect the diversity of English usage worldwide. Inclusion of diverse Englishes and English speakers in EL materials provides invaluable opportunities for students to learn to understand, respect, and value a broader spectrum of Englishes and moves us closer to the day when, instead of saying “But he speaks with an accent,” our students will say, “Teacher, I like his accent!”

Mary Romney is a retired educator who spent over 40 years in English language teaching in Madrid, New York, Barcelona, and Connecticut. She has an EdM in instructional media, an MA in TESOL, an MA in Spanish, and a BA in Spanish. She has been active in the TESOL International Association for over 30 years. 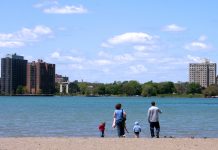 Michigan Moves on Preschool for All

Beyond Crises: Imagining Families and Communities