Two is Always More Than One 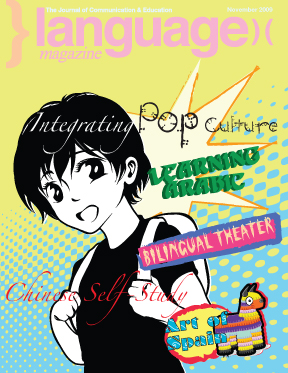 As we near the end of President Obama’s first year in office, we are reaching a crucial point for the future of language education in the U.S. Federal education funding is at an all-time high and there is a general consensus that a revamped Elementary and Secondary Education Act (ESEA) needs to be in front of Congress in the next few months.
Prior to his election, the President stated that he would like to see young Americans grow up to be bilingual, or even trilingual, and, during their campaign, Obama and Biden voiced their support for transitional bilingual education. Now, Secretary of Education Arne Duncan is saying that the U.S. is disadvantaging its children by not helping them become bilingual (see News, p.11).
Duncan said at the end of last month that he believes the current economic crisis is as good a time as any for leaders at the state and national levels to make long-term positive changes to America’s educational system. “This is an amazing time to be working in education in this country,” Duncan said. “We are going through a crisis, we have the worst economy since the Depression, we are fighting a couple of wars and we also are fighting an educational crisis.”
The best ideas on how to do this, Duncan said, are not going to come from Washington, but from educators at the state and local levels, “The best ideas come from great principals, great teachers, great superintendents and great districts making a difference in students’ lives,” Duncan said. “We have this amazing opportunity to invest in what works and erase the achievement gap and raise the bar to a different level for our children.”
The administration is clearly being pragmatic in its approach to the current lack of language skills in the U.S. and the effect of this on future prosperity by recognizing that we not only need to train English speakers in other languages but we also need help English Language Learners retain and develop ability in their mother tongues.
We also need to be pragmatic in our campaign to encourage multilingual education and recognize that world language educators, bilingual educators, and English language teachers must work together to promote the common goal of improved literacy in all languages. We need to embrace all the means in which we can reach this goal, such as bilingual programs, dual-language schools, two-way immersion, exchange programs, and online initiatives. And, at the same time, we should recognize that, due to political exigencies, one means may be promoted ahead of another, but we must persevere with our common goal of creating an education system suitable for a multilingual, multicultural society.
The government is finally recognizing that educators have the best ideas about education reform, and it has already secured the funding to make a difference, so make sure that your voice is heard by contacting your representatives, attending meetings, and sharing your experience.

Kate Sommers-Dawes offers all teachers the means to take advantage of one of education’s most effective tools: dual-language theater

Arabic: More Than a Language

The Art of Spain