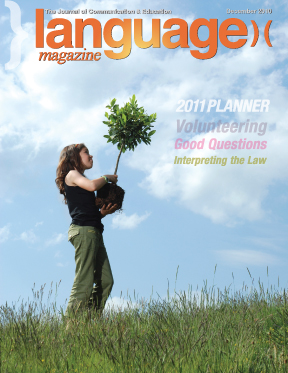 Last month, Richard Haass, president of the Council on Foreign Relations, delivered the keynote address at the American Council on the Teaching of Foreign Languages convention which repeated the familiar theme that during budget cuts, we need to find convincing reasons to justify funding for language programs, namely national security and international trade. The conclusion of this argument is that we have to concentrate our linguistic efforts on Chinese, Arabic, and the languages of conflict zones. Yet the most remarkable aspect of the speech has been the reaction to it.

Russell A. Berman, vice president of the Modern Language Association, condemned this utilitarian approach, concluding his article in Inside Higher Ed (“Foreign Language or Foreign Policy?” 11/23/10) with, “Language learning is not just an instrumental skill, any more than one’s writing ability is merely about learning to type on a keyboard. On the contrary, through language we become better thinkers, and that’s what education is about, at least outside Washington.”

The acquisition of any second language does even more than improve critical thinking — it reveals a new perspective to the world. Berman touched a chord and frustrated educators chimed in with a barrage of comments critical of the way in which we have so limply allowed the focus of our educational system to become the passing of mediocre tests rather than aspire to the higher ideal of producing young people with the educational catalyst that will enable them to develop and make the most of their lives.

Even before the current recession started to bite into budgets, language teachers found themselves having to justify their costs — English as a Second Language and bilingual  educators were criticized for not producing English speakers overnight, and the value of teaching most world languages was questioned as economic and military foci shifted from Europe to Asia.

Yes, underfunded schools are struggling to make sure that all their graduates can read, write, and do basic math but surely the lack of inspiration in our core curricula is contributing to disaffection amongst students and teachers alike.

Of course, we should be encouraging the learning of Chinese and Arabic. However, neglecting other languages is a false economy. Not only does study of French, Spanish, German, Russian, and Italian open the mind to many of the great works of literature and philosophy on which our society is based, it also makes long-term economic sense. There are already 220 million French speakers and that figure is predicted to increase to 700 million by 2050 (Language Magazine, Nov 2010, p.39), while there may be more than 900 million Spanish speakers by 2050 (see p.14), and who knows what the socio-political landscape will look like by that date?

Communication skills are valuable in every aspect of our lives and research shows unequivocally that learning second (or third) languages improves first language comprehension.

As we move into a New Year and step back to look to the future, maybe we should consider how our educational system can best prepare students for life in the 21st century, recognize that workforce preparation is not its sole purpose (as Dickens did more than 150 years ago), and how we can enrich lives with the gift of a second language.

Last Writes
Richard Lederer with a dog’s Night Before Christmas