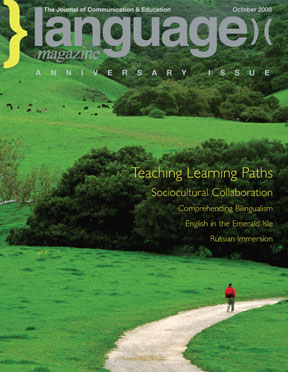 The Ladies Professional Golf Association (LPGA) has recently created a furor by issuing an edict requiring that all competitors in its tour speak English or face suspension. The controversy soon spilled from the sports pages to headline news, and the LPGA backed down when it became apparent that the public and golfers were outraged at what seemed like a move to discriminate against foreign players who have increasingly come to dominate women’s golf.

Of course, the policy deserved this bombardment of public protest, as well as demands from the tour’s own corporate sponsors, such as State Farm, that the organization review its policy. However, at the same time, calls for English-only governmental policies receive widespread support and relatively little controversy. Just last month, pressure groups in Tennessee tried unsuccessfully to add an English-only initiative to November’s ballot and there were calls to make the southern Californian city of Lancaster English-only despite over 30 percent of its population being Latino. Thirty states have made English their official language, including California in 1986, and English-only movements receive widespread support instead of the outpouring of public indignation that they warrant.
The French, renowned for their linguistic pride, are encouraging the acquisition of English by offering free classes nationwide; in the African country of Ghana, where English is the official language but over 100 languages are spoken, the government is encouraging its people to learn French to better communicate with their neighbors; and, in Costa Rica, the government has embarked on an ambitious plan to create a bilingual country where three quarters of the population speak Spanish and English (see all reports on page 14).

All of these policies have been formulated in recognition of the fact that the world works better, is more interesting, and provides more opportunities when more languages are spoken. Even many advocates of English-only policies appreciate that multilingualism is an asset but argue that it is a luxury that we cannot afford although we share the Americas with over 300 million Spanish speakers. Surely if Ghana and Costa Rica can afford bilingualism then so can the U.S.

English-only policies fly in the face of the principles on which this country was founded. Settlers came to America to escape the hierarchy of Europe, to create a meritocracy where it didn’t matter where your parents came from, what they did for a living, what language they spoke — all that mattered was what you did with your life, what you achieved, and how you treated your fellow citizens of the world. It is this principle that binds this nation together, not demands that we all speak the same language.