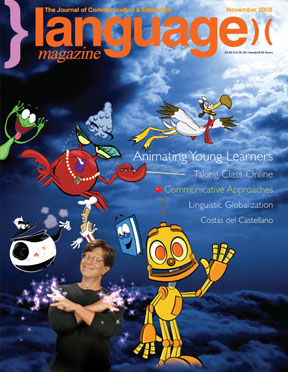 In a recent commentary published online in Education Week (Give Latin [and Potential Dropouts] a Chance, September 22, 2008), Baynard Woods, a public school teacher from Washington DC, explained how his experience convinced him that the teaching of “Latin might play a role in eliminating the achievement gap between disadvantaged and affluent students.”

Woods’ theory is that the prestige and aura of Latin instilled a sense of self-worth in his underprivileged students that they had previously lacked and inspired increased achievement across the curriculum. He also believes that the rigid logic of its grammatical system presented them with easily comprehensible challenges to which required them to think, or as Woods explains “Students were able to see language as a game with rules that could help them think.”

There is a wealth of research supporting the argument that language learning improves academic performance in general, but little research has been undertaken into its effect on self-perception. Although there is a lack of empirical evidence, there can be little doubt that the acquisition of a second language confers upon learners a sense of discovery and empowerment that must boost self esteem.

Despite the evidence in support of second language learning, it is still considered a luxury available only to the middle classes, and not worthy of core subject status. Even English language learners are often actively discouraged from improving their command of their mother tongue in the misguided approach to the acquisition of basic literacy.

The current collapsing of economies around the world like a house of cards and the recognition that national governments need to work in unison for a remedy are painful proof of the global interconnectivity that is now part of our everyday lives. Now, more than ever, we can clearly see that languages will be essential to the success of the next generation. To enable our children’s success, languages must become part of the core curriculum from kindergarten.

We need to raise our expectations of all students and trust them to rise to the challenge of learning a second (or even third) language from an early age. Of course, basic English literacy is necessary but if that is all we expect we will be lucky to achieve it. Only by aiming higher can we transfer respect to children necessary for them to believe in themselves.

As we run up to the presidential election, bear in mind that Senator Obama has stated in countless interviews that he believes that while English Language learners should become fluent in English, he also believes that English-speaking students should be learning a second language by emphasizing foreign languages in schools, while Senator McCain has not voiced his opinion on the subject of language education.

Whoever presides in the White House for the next four years, let’s hope that they have high hopes for all American students and recognize that investment in their education will produce a better return than any stocks, bonds, or commodities.

Communication on the Fly
Haydn C. Griffith offers a practical perspective to the communicative approach to language acquisition