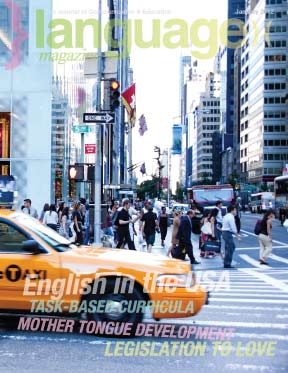 As we’re entering a Presidential election year, we thought it would be interesting to compare the prospective candidates’ positions on language education. Despite several requests, none of the candidates were prepared to spell out their position on the political hot potato of bilingual education, or even the less contentious subject of funding world language education. It’s hardly surprising, seeing as education has been largely ignored by most of the frontrunners.

However, much can be gleaned from past positions and current manifestos: More.

Mother Tongue Key to World Education Growth
A bilingual approach not only improves educational outcomes in developing countries but could help close achievement gaps in the U.S.

Taking Teaching to Task
Juan José Vázquez-Caballero on how to create curricula to allow language students to be more engaged, motivated, and prepared for the real world

Last Writes
Richard Lederer and Metaphors Be With You