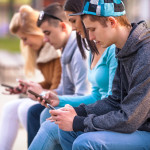 John Sutherland, a professor of English from University College London, led a study that confirmed the English Language is evolving faster than ever due to social media and communication technology. Sutherland’s study on common social media and “text speak” terms found that most British parents were baffled by the language used by their children. According to the study, which was commissioned by Samsung for a phone launch, there was a “seismic generational gap” between the older and younger generations when it came to how modern informal language was used.

The term that parents found most confusing was “fleek” – which means looking good – followed by “bae,” which is thought to have come from “before anyone else,” or to represent a shortened version of “babe.” 86% of parents in the survey said that they felt teenagers spoke an entirely different language on social media. Popular social media acronyms “ICYMI” (in case you missed it), “TBT” (throwback Thursday) and “NSFW” (not safe for work) also made the list of terms parents failed to understand. Sutherland said, “The limitation of characters on old handsets were a key factor in the rise of acronyms in text messaging such as TXT, GR8 and M8. “However technological evolution has meant that these words are now effectively extinct from the text speak language and are seen as antique text speak.”

Geoff Nunberg, Linguist and professor at UC Berkeley said in an interview with Buzzfeed, “Fleek is interesting because it just bubbled up out of nowhere in a way that words didn’t used to. It used to be that slang began among high school kids and worked its way around the school and maybe spread to kids in other generations before eventually reaching the speech of older people. By the time the older people were using it, the high school kids had moved on to something else. The whole point of slang is to keep your language separate, but now you can make a video or a Vine, a word catches on, the link is passed all around and two weeks later there are 2 billion people who are using this word, it’s astonishing.” In accordance with this, Tom Dalzell, a self-proclaimed slang historian, told the Wall Street Journal, “Yesterday’s cutting-edge is today’s ho-hum. [Social media has] really shortened the shelf life.” Slang is not only created more quickly due to social media and technology, but goes out of style faster because once a new slang word reaches a wider audience it loses its value.