Nehemías Giménez García sees a boost for multilingualism in a multi-party government. 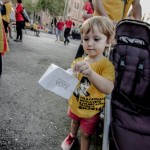 On Sunday, December 20th, the Spanish democratic system won. The general election results, boasting 73.2% voter participation, virtually abolished the two-party political system. One challenge that lies ahead of the new multi-party democracy is to develop policies rooted in alliances and agreements to facilitate the next 4-year legislature. Nevertheless, having one of the youngest European democracies, Spaniards have voiced their desire for more robust representation that accounts for a plurality of voices, rendering the two-party system obsolete. The two traditional parties, PP (Partido Popular) and PSOE (Partido Socialista Español) will no longer control every aspect of Spanish politics. Injecting the Spanish political system with diverse ideologies and approaches to legislating consequently promises a brighter future for minority languages in Spain.

Traditionally, minority languages in Spain (Catalan, Galician and Basque) suffered repression and were even treated criminally during Franco’s 36-year dictatorship, in favor of Spanish. Since the transition to democracy in the 1970’s, PP-PSOE governments have failed to recognize the value of these languages and cultures. What’s worse, the political climate antagonized cultural differences and antipathy between the Spanish regions, and as a result the idea of secession has gained political support, especially in Catalonia. The controversial LOMCE (Ley orgánica para la mejora de la calidad educativa) unilaterally approved by the PP in 2013, exemplifies the marginalization of these minority languages, which were left out of the core curriculum subjects.

To the dismay of many Spaniards, corruption, unkept promises and unpopular austerity were not considered legitimate reasons to electorally punish Prime Minister Mariano Rajoy’s party (PP). It was still the most popular party, but lost its absolute parliamentary majority. However, both the PP and the PSOE have lost the Spaniard’s trust in favor of emerging parties, who call for transparency.

Podemos, headed by Pablo Iglesias and based on the social movement 15-M, played the marginal guest role that successfully emerged as a major political force. With more than 20% of the votes, this party became established as the third most-voted party in Spain, but the first party in Catalonia and the Basque Country. Their encouraging slogan “Si se puede”, taken from Obama’s “Yes we can”, percolate into the collective Spanish conscious that cry out for change. Having already gained important city councils in Madrid and Barcelona, Podemos could represent the key respectfully negotiating territorial conflicts. This emerging party understands Spain as a state consisting in several nationalities. One of their proposals includes revising the Spanish Constitution, recognizing Catalonia’s right to decide about independence and safeguarding educational laws from reforms that stem from political motives each time a new government is elected into office.

The Spanish general election results are not indicative of a revolution, but reflect an important political evolution. Dialogue and agreement seem to be the new bricks to build a diverse Spanish government. Catalan, Galician and Basque could be valued more in a new politic panorama where a multilingual population recognizes Spain’s heterogeneous cultural richness.