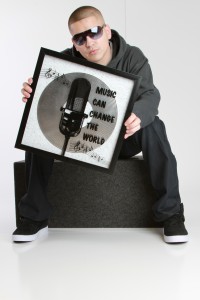 Welcome to the journey! iBienvenidos al viaje! I’m really excited to get this school year started and to get back out on the road again. For the past three years, I’ve traveled all over the U.S. and Mexico to perform and speak to students about the importance of learning other languages. With students in many countries learning three to four languages before they’re out of high school, “English only” just doesn’t make sense for our students in the U.S. I used to be the kid in Spanish class wondering, “why am I studying this language? How am I ever going to use this in my life?” After some motivation from the Marine Corps, and meeting some great people, I now use the language every day and I can’t imagine where I would be without it.

I have also had some amazing opportunities during this educational journey, and I’ve tried to learn something from everyone I’ve crossed paths with along the way. Teachers and administrators have opened their hearts and classrooms to me, and I’ve been able to learn so much, not just from them but also from their students. Being able to see multiple dual-language and biliteracy programs across the country has given me a unique perspective into the world of multilingual education. My journey of going from a commercial hip-hop artist to a bilingual-educational hip-hop artist has been filled with loving and compassionate people who have helped to guide me. What I’ve learned along the way is that everyone’s approach is a little different depending on their area, the school they’re in, the district leadership, and many other factors.

While I’ve been in hundreds of classrooms during the school year, I’ve also been able to attend many dual-language and world language conferences across the country—I even delivered a keynote at the 2015 CABE Conference. Last year, I also attended the mega dual-language conference, La Cosecha. It was a life-changing experience for me, and I’ll definitely be back this year. Seeing dual-language educators from all over the world working together to do the best they can for their students really reinforced to me that I’m doing what I’m supposed to be doing. I’ll get a little more into that later. But first, the journey.

After having the opportunity to travel all over the U.S. and Mexico, I’ve learned that sometimes life is more about the journey than the destination. This is about both. On the journey to get back to La Cosecha in 2016, I’ll be attending and speaking at various language conferences, meeting educators, and performing for their students. We’re starting out in California then following the map to Colorado for CABE again (this year with my bird friends from Avian Kingdom), Indiana, New York, and the East Coast all before September is over.

October brings Cuba, Florida, and Texas with the TABE Conference, before we finally arrive in Santa Fe, New Mexico, to perform and present at La Cosecha in November. This year, I hope to be more prepared­—in 2015, I was invited to attend the conference for the first time, and the experience was phenomenal. I have to admit that it was a bit overwhelming for me, though. Seeing so many educators from all over the world who are hungry for knowledge and techniques to bring back to their students is nothing short of inspiring. Knowing the battles that we’re up against as educators is important to developing the most effective ways to fight those battles and to educate our students to the highest levels possible. As

their mission states: “La Cosecha offers the unique opportunity to share best practices, resources, and current theory and practice, build networks, and fuel our community’s efforts to build a better future for our children as we ‘harvest’ the best of our multilingual and multicultural communities.”

With over 300 presenters and 2,400 attendees from more than 35 states and six countries at La Cosecha this year, educators will have plenty of options to fill their instructional tool boxes and get a little food for the soul too. Teaching techniques and best practices for dual-language students are featured at the conference, but there’s so much more than that. As most dual-language educators know, our jobs aren’t solely about academics. There is a social and a personal component that sometimes influences us to stand up and advocate for our students. We also need the tools and guidance to be fully capable of doing that. Meeting and networking with educators who have “been there, done that” is one of the most effective ways to learn how to best advocate for our students. This is what makes La Cosecha and other conferences so special, along with all of the academic aspects. They really are convocations of the most awesome minds in dual-language education across many different strands.

For me, as much as it is about academics and advocacy, La Cosecha is also a cultural experience in itself. The backdrop for the conference is the gorgeous and historic city of Santa Fe, New Mexico. In countless ways, Santa Fe is the perfect city for this particular conference. Take a brief walk through the city and you begin to see the intricate ways in which the indigenous, Mexican, and European cultures are woven together to form their own distinct New Mexican identities. The speakers and performers at the conference reflect this spirit of diversity and culture. This year, the conference will also feature a live benefit concert with Grammy-award-winning Latin fusion group La Santa Cecilia and the all-female vocal and percussion ensemble Mala Maña.

The focus on American Indian and Indigenous cultures at the conference is a breath of fresh air for our Native brothers and sisters. At statewide conferences in New Mexico (DLeNM and NMABE) and Colorado (CABE), my eyes and heart were opened to the importance of Indigenous-language retention and expansion. When we lose language, we lose culture, and we lose history. Even more powerfully, I’ve seen first hand how Indigenous students have a stronger sense of identity, and of their own history, when they’re encouraged to learn their ancestral languages. La Cosecha puts a major emphasis on tribal language programs and brings in Indigenous educators from all over the U.S. In this way, the work that is happening in the individual states is shared with educators from all over the world.

We’re living in exciting and innovative times, especially within the multilingual-education community. The support for programs from educators, parents, and the scientific community has never been greater. In November, voters in California will vote to possibly repeal the state’s ban on bilingual education. The California Association for Bilingual Education has been at the forefront of raising awareness and fighting for this repeal. California isn’t alone in its fight either; multilingual education is under attack across the U.S. The idea that there’s a law against bilingual education is backwards to even think about. But it’s also the reality of how much work we still have to do.

Embracing Our Roots — Fortaleciendo nuestra comunidad bilingüe is the theme of the 2016 La Cosecha conference. I come from a German/Irish background, and I would love to know more about my family and my history. I would love to be able to embrace those roots in an authentic way, but I don’t have that link to my past. By the second generation, my family had already lost the connection to our language. The connection to our culture followed shortly after. What if my family and other German Americans had been encouraged to speak both languages? How much would that have changed the U.S. landscape and our attitudes toward language learning? We can only speculate, but one thing is for sure: loss of language = loss of culture. Encouraging all of our students to embrace their roots is crucial to allowing them to grow as individuals and to giving them a renewed sense of community. Multiple studies have shown that including culturally relevant material in the learning process leads to higher comprehension and retention. Academics, advocacy, and culture are the primary focuses of La Cosecha. I think that’s why I’m so drawn to this dual-language conference-—it’s one of a kind.

I originally got into dual-language education working with middle school Latino students in Indianapolis, mostly the children of immigrants or immigrants themselves. Our students learned in English and in Spanish. They had an open space to learn about themselves and their histories. We encouraged them to discuss and write about the issues affecting them and their families. We also advocated for them and taught them how to advocate for themselves. Learning about themselves and those issues seemed to give a sense of pride to our students. Knowing that their teachers would go to battle for them also gave them a confidence which translated academically as well as socially.

This experience set the stage for the rest of my life. It’s where I went from being musically focused to educationally focused. At the time, I had no idea that the two would one day collide to become my life’s work. Now I do my best to use my music in a positive way, and in an educational way, to help students see the possibilities that I didn’t see as a young person. At the end of the day, their future is our future.

Over the next few months, I’ll have an up close and personal look at some of the most effective multilingual-education programs in the country and their methods for success. Not being attached to only one classroom allows me to perform for tens of thousands of students and educators with the messages of multilingualism, positivity, and the power of believing in oneself. This enables me to learn from some of the best dual-language educators in the U.S. They will be the first to say that the best teaching methods and practices are steadily evolving. It’s a constant learning process ,because multilingual education isn’t set in stone-—it’s still very fluid. There’s no magical answer that will raise our students’ reading levels, test scores, and linguistic comprehension. But there are plenty of effective options and combinations to make all of that happen. It’s up to us to seek them out and integrate them into the classroom. When we do, the results will be there. Much love and have a great school year!