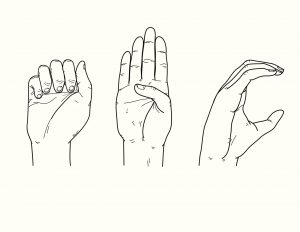 A new report in Frontiers in Psychology found that deaf adults who use British Sign Language (BSL) had significantly faster peripheral vision reaction time than non-deaf BSL language interpreters and that the interpreters had faster reaction times than hearing adults who do not speak BSL.

What is interesting about deaf individuals is that from having an altered cognitive experience, they clearly experience sensory and cognitive changes. This means that since deaf individuals are unable to hear, their vision and other senses change. Many deaf individuals also are immersed in some kind of sign language, which is a visual spacial language that has been proven to alter the conceptual and sensory visual system different than spoken languages.

During sign language conversation, fluent signing individuals tend to look at the face of who is signing to them. Because signers are looking straight ahead during sign language, they are more likely to stimulate visual stimulation in peripheral vision. To test the levels of reaction time, researchers gathered 17 people who had been deaf since birth or under 8 years old, eight qualified full-time BSL interpreters, and 18 participants with no hearing loss and no experience in sign language. The participants sat in a fixed position facing forward and used a joystick in their hand to identify the location of brief LED lights that blinked in different locations at different times.

While this was a small study done on a small group from one country, it may be precedent for further studies on the results.