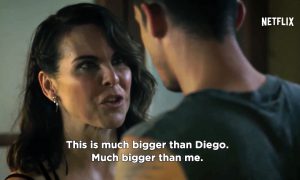 Netflix has just released its new Spanish-language series, Ingobernable. Netflix has had its fair share of success recently in the Spanish-language department, most notably the 2015 Spanish-language drama Narcos, a crime drama filmed in Colombia that follows the story of drug kingpin, Pablo Escobar. Narcos was wildly successful with American audiences, and presumably proved to Netflix that English-speaking audiences are open-minded when it comes to content presented in Spanish. The online video service therefore rolled out the carpet again for a release of Ingobernable. The title means ungovernable in English, and is most likely referencing the tumultuous socio-political climate of Mexico that the show encompasses.

[Warning: spoiler alerts ahead.] The first episode opens with star Kate Del Castillo (who plays the character, Emilia Urquiza), looking over a hotel balcony after deciding to divorce her politician husband, President Diego Nava (played by Erik Hayser). The scene erupts into violence, as Diego Nava drags Emilia through the presidential suite, down a flight of stairs, and throws her against a wall, until they end up on the balcony where Diego falls to his death below. When Emilia awakes from the ordeal, a bloody gun has been placed in her hand, thus thrusting the viewer forward into the dramatic world of Emilia hiding from the people who framed her for her husband’s murder, along with the actual Mexican government.

The series, therefore, follows less the inner workings of the political world of Mexico, but rather the first lady. The show was shot and produced in Mexico City by Argos Comunicación, a production company that is known for its work in successful telenovelas. In the fashion of telenovelas, English audiences may find the first couple of episodes a tad melodramatic, especially as the backstory of Urquiza and Hayser is unveiled slowly, leaving Urquiza to do little more than appear secretive on screen. Still, as the plot expands throughout coming episodes, it will be interesting to see how English and Spanish audiences, alike, react to the Spanish-language drama.