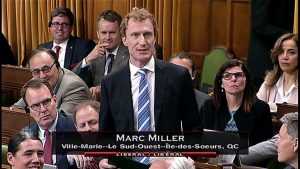 Marc Miller, a Quebec member of parliament, addressed the House of Commons in Kanien’kéha, the language of the Mohawk tribe. This marks the first time the indigenous language has been used officially in the House since it was established in 1867. The speech coincides with Canada’s National Aboriginal month, which is being celebrated this June.

Miller, a non-indigenous 44 year old politician from Quebec has been studying Mohawk since January from a language program run by Brian Maracle and Zoe Hopkins of the Six Nations of the Grand River.

“I stand here to honor the Mohawk language and I pay my respects to their people. Hopefully it will help to us to become better friends,” Marc Miller said, and added,

“I also hope that we will hear the Mohawk language a lot more often here and that more Canadians will be proud to use it to speak to one another.”

Miller, who is bilingual in English and French, told The Guardian that he was inspired to learn the language when he saw English speaking colleagues trying to learn French. He was also pushed to set an example due to the state of Canada’s indigenous languages.

Watch the speech below.

The National Aboriginal History month began in 2009, and aims to highlight the contributions of indigenous peoples to Canada.