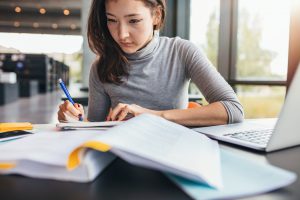 Jeff McQuillan shares evidence to show that reading, not cramming, is the key to improving college entrance exams, including the SAT.

This is very poor advice, whether one is rich or not.

Most studies find that test preparation for the SAT produces very small effects on average—a few dozen points, at best. Claims that one can boost one’s score by hundreds of points have never been confirmed in experimental studies.

Becker (1990), for example, analyzed several dozen studies and found that the average point gain in carefully controlled studies was somewhere between nine and 20 points. These are tiny gains that are of no practical importance in college admission decisions. Other reviews have come to similar conclusions (see a brief summary in Liu (2014)). In addition to being useless, SAT test prep can also be very expensive. The prices for two well-known test prep courses as of April 2017 were $1,599 (Kaplan) and $1,099 (Princeton Review). Private tutoring would easily cost much more.

A much better strategy for students, one that costs $0.00, is the following:

Go to the public or school library.

Check out books on topics you are interested in and enjoy.

Read those books for as many hours a day as you can.

Unlike test prep courses, extensive self-selected (pleasure) reading is associated with higher literacy levels and higher test scores (Acheson, Wells, and MacDonald, 2008). Both correlational and experimental studies have found that reading improves not only vocabulary and reading

comprehension but also writing, spelling, grammar, and knowledge of the world (Krashen, 2004)—all things that will have a significant impact on SAT scores.

What is more, the newly revised SAT is even more reading-dependent than the previous versions, making a strategy of voluminous reading a better option than ever.

Instead of spending four hours a day, five days a week in a ten-week summer test prep program, high school students would be better advised to dedicate that time to reading.* Such a plan would allow students to read about 2.5 million words, which is probably enough to raise even a good high school reader’s vocabulary by 1,000 words or more (Nation, 2014; McQuillan, 2016).

For struggling adolescent readers, including those from low-income families without the benefits typically provided to “rich kids,” the impact would likely be even more dramatic.

Our advice to students should be simple: read more, prep less.

*If you really want to spend $1,000 on test prep for your children, I suggest buying them a hundred $10 paperbacks. After they finish reading them, donate the books to a public or school library in a low-income neighborhood. Now you have helped your children and hundreds of other kids as well.

Note: It is not surprising that states that have the best school and public library systems also tend to have the better SAT scores, controlling for other types of school spending (McQuillan, 1996).

Dr. Jeff McQuillan is a senior researcher at the Center for Educational Development and the producer of ESLPod.com. He is a recognized expert and leading researcher in English language learning and teaching. He received his PhD in applied linguistics and education from the University of Southern California and was a university professor for many years. His work has appeared in media worldwide, including CNN, Washington Post, Los Angeles Times, Deutschlandfunk Radio, El Pais, China Post, Macworld, Diario Financiero, and Universia.