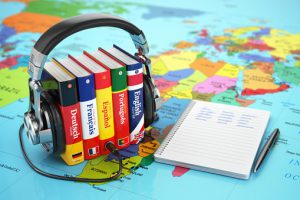 A new study by University of Washington Institute of Learning and Brain Sciences (I-LABS) researchers, published in Mind, Brain, and Education, investigates how babies can learn a second language outside of monolingual homes. “As researchers studying early language development, we often hear from parents who are eager to provide their children with an opportunity to learn another language but can’t afford a nanny from a foreign country and don’t speak a foreign language themselves,” said Naja Ferjan Ramirez, a research scientist at I-LABS. The researchers developed a play-based, intensive English-language method and curriculum and implemented it in four public infant-education centers in Madrid, Spain, where the country’s public education system enabled the researchers to enroll 280 infants and children from families of varying income levels.
Based on years of I-LABS research on infant brain and language development, the method emphasizes social interaction, play, and high quality and quantity of language from the teachers. The approach uses infant-directed speech—often called parentese—the speech style parents use to talk to their babies, which has simpler grammar, higher and exaggerated pitch, and drawn-out vowels.
Babies aged seven to 33.5 months were given one hour of English sessions a day for 18 weeks, while a control group received the Madrid schools’ standard bilingual program. The children who received the I-LABS method showed rapid increases in English comprehension and production and significantly outperformed the control-group peers at all ages on all tests of English. By the end of the program, the children in the UW program produced an average of 74 English words or phrases per child, per hour, compared to 13 English words or phrases per child, per hour in the control group.
Follow-up testing 18 weeks later showed the children had retained what they had learned. The results, said co-author Patricia Kuhl, co-director of I-LABS, have the potential to transform how early language instruction is approached in the U.S. and worldwide: “I-LABS’ new work shows we can create an early bilingual-learning environment for dual-language learners in an educational setting, and in one hour per day, infants can ignite the learning of a second language earlier and much more easily than we previously thought. This is doable for everybody.”