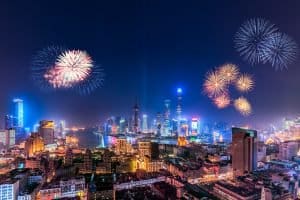 Professors and scholars from China’s Zhejiang University and Columbia University in the U.S. talked about education in China in relation to the UN’s sustainable development goals. At the opening ceremony, Liu Zhenmin, UN undersecretary-general for economic and social affairs, reminded the audience that Chinese is one of the oldest languages in the world and one of the six official languages of the UN, and that its importance was rising with China’s economic growth and increasing involvement in global affairs.

Wu Haitao, China’s deputy permanent representative to the UN, said the Chinese language bears testimony to the evolvement of the UN, as well as the increasingly closer relationship between it and China. “Maintaining world peace and promoting common development are our shared goals,” he said. Over 10 million people follow the UN on Chinese social media such as Weibo and WeChat, Wu added.

Speaking at the opening of an exhibition, Charm of Chinese Culture: from Characters to Literature, at the UN Office at Geneva (UNOG), Michael Mølller, director-general of UNOG, said, “Multilingualism is the basis for multilateralism. Only if we understand each other can we find common ground.” He praised the “ambitious project of learning Chinese for their invaluable contribution to building bridges across language divides.”

The Geneva exhibition had an interactive workshop with touch screen games, video clips, and demonstrations of Chinese calligraphy. Books of contemporary Chinese literature and their translations were also presented.

China’s permanent representative and ambassador to the UNOG, Yu Jianhua, explained that one of the thousands of Chinese characters in use today that holds the key to understanding Chinese philosophy is Min, or “people” in English. This, he said, is central to the idea of “putting people first, a founding principle of the Chinese society” and a value echoed by the UN’s theme for 2018 of “people at the center.”

UN Chinese Language Day has been observed on April 20 every year since 2010, celebrating the language’s contribution to the world while encouraging more people to learn it. April 20 marks the Guyu, Grain Rain, or “Rain of Millet” in Chinese. The Guyu is sixth of the 24 solar terms in the traditional lunar calendar, the day when farmers start sowing. It is also the day to pay tribute to Cangjie, an imaginary figure in traditional Chinese lore regarded as the inventor of Chinese characters. Legend has it that when he invented the characters, the gods and ghosts cried and the sky rained millet.