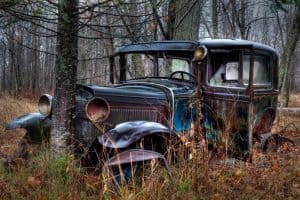 After decades of research, University of Kansas researcher William Keel believes it was Henry Ford, not Kaiser Bill, who was responsible for the decline of the distinctive German dialects spoken by immigrants and their descendants in five Kansas and Missouri settlements during the 20th century.

His theory is that you couldn’t keep their youngsters down on the farm after Ford’s automobile came to the isolated agricultural settlements that had been established in the mid-19th century.

It was that, far more than any anti-German sentiment in the aftermath of World War I, that led to the decline of these linguistically distinctive communities, Keel says, and so he argues in a chapter of “Contemporary Language Contacts in the Context of Migration” (Winter publishing, Heidelberg, Germany).

The exception to the rule is the increasing population of speakers of Pennsylvania German in Kansas: Old Order Amish. They shun the automobile and remain in rural isolation.

Keel, professor of Germanic languages & literatures, has been studying—interviewing, recording and writing about—these communities since the 1980s. He and his students have published online the Linguistic Atlas of Kansas German Dialects, where the settlements are mapped out and sound samples of native speakers are preserved.

In each case, the decline in language usage followed a similar, generational pattern, until today there are only a few hundred fluent speakers of these dialects in the two states.

Interestingly, Keel says, the 21st century has seen the growth of one other pocket of German-speaking immigrants—who arrived via Poland, Ukraine, Canada, and Mexico—in southwest Kansas, attracted by jobs in feedlots and meatpacking.

“They speak a variety of Low German called ‘Plautdietsch,’” Keel said. “There are maybe 3,000 to 5,000 German-speaking Mennonites in southwest Kansas. It impacts the school system, with requirements for English as a Second Language courses. It also affects the Kansas statewide health program for farm workers.”