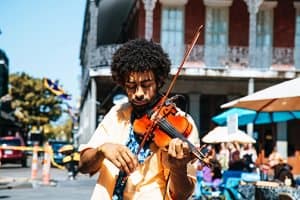 A new study reveals that bilinguals and trained musicians utilize fewer resources in their brains while doing tasks involving memory. This means that it’s easier for them to do so. As their brains use less effort to perform tasks, researchers infer that their musical and bilingual brains may protect them from the onset of cognitive decline later in life.

The study, which was published in the journal, Annals of the New York Academy of Sciences, gathered 41 participants ages 19-35 and split them into three groups: monolingual English-speaking non-musicians, monolingual English-speaking musicians, and bilingual non-musicians. The participants were played a sound, and then were asked to identify if the proceeding sound was the same as the previous one. Sounds from musical instruments, the environment, and humans were all used within the study. Spatial awareness in sound was also studied. Participants were also played a sound and asked to identify if the proceeding sound came from the same direction.

Researchers found that musicians across the board were able to identify if the type of sound was the same, while bilinguals and musicians alike performed better on the spatial portion of the study. “People who speak two languages may take longer to process sounds since the information is run through two language libraries rather than just one,” said researcher and associate professor at the University of Toronto’s Institute of Medical Science and the Department of Psychology, Claude Alain, “During this task, the brains of bilinguals showed greater signs of activation in areas that are known for speech comprehension, supporting this theory.”

The study can be found here