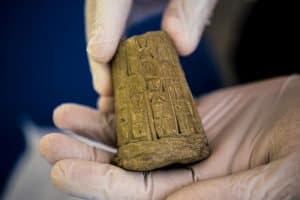 U.S. Immigration and Customs Enforcement (ICE) has returned 3,800 ancient artifacts, including cuneiform tablets, cylinder seals, and clay bullae, to the Republic of Iraq. The artifacts were smuggled into the U.S. in violation of federal law and shipped to Hobby Lobby Stores, Inc, a nationwide arts-and-crafts retailer.

Many of the tablets can be shown to come from the ancient city of Irisagrig. The tablets, primarily from the Ur III and Old Babylonian period (2100-1600 BCE), are mostly legal and administrative documents, but also include an important collection of Early Dynastic incantations and a bilingual religious text from the Neo-Babylonian period. Two clay cones are inscribed with royal inscriptions from the Early Dynastic Lagash II periods (mid-third millennium BCE). The clay bullae include artifacts believed to be of Parthian or Sasanian date (late 2nd cent. BCE – early 7th cent. AD).

“These pieces are very important to us and they should be returned home to Iraq, to the rightful owner of these pieces,” said Ambassador of Iraq to the U.S. Fareed Yasseen.

The artifacts returned were initially intercepted by U.S. Customs and Border Protection (CBP). The shipping labels on these packages falsely described the cuneiform tablets as tile samples.

“CBP is honored to have played a role, together with ICE, in the return of these national treasures to their rightful owner, the Republic of Iraq.  In doing so, we ensure the protection of this priceless cultural heritage and secure a precious, tangible link to the past for future generations,” said U.S. Customs and Border Protection assistant commissioner Ian Saunders.

“The Republic of Iraq, standing on the land that was once home to the storied city-states and kingdoms of Mesopotamia, has a celebrated heritage as a cradle of civilization,” stated U.S. Attorney Richard P. Donoghue.  “We are proud to have played a role in removing these pieces of Iraq’s history from the black market of illegally obtained antiquities and restoring them to the Iraqi people.”

ICE has returned over 8,000 artifacts to over 30 countries since 2007, including paintings from France, Germany, Poland and Austria, 15th-18th century manuscripts from Italy and Peru, cultural artifacts from China, Cambodia, and two Baatar dinosaur fossils to Mongolia, antiquities and Saddam Hussein-era objects returned to Iraq, ancient artifacts, including a mummy’s hand, to Egypt, and most recently royal seals valued at $1,500,000 to the Republic of Korea.